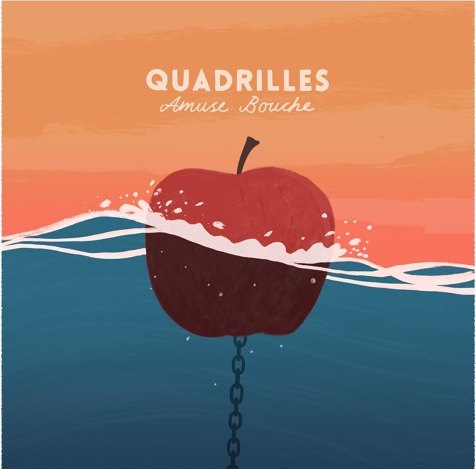 Friday 28th July marks a momentous end of the month and more importantly an incredible record will be unveiled to the world. Quadrilles are back and the new record that follows, well worth the wait.

Quadrilles are set to release their new 9 track album Amuse Bouche, the highly anticipated follow up to 2015’s Isotopes, which led the band on numerous tours across the UK and Europe, with an appearance at ArcTanGent festival. The loveable London based quartet consists of Luke Barber on guitar and vocals, Dave Molnar on bass, Ken Chu on guitar and Luke R. Gain on the drums.

What is set to be on your record of the year lists in no time at all, Amuse Bouche is an uplifting collection of compositions. With shifting noise pop structures, intricate math pop at it’s best, Quadrilles‘ sound is expansive and they’ve written and created an album which will no doubt reach listeners afar. Their unique sound is so vibrant, made by a band with genuine passion for the material they’re making. Quadrilles combine their creativity to create an explosive melodic math instrumentation. Ample amount of alternating time signatures, hypnotic vocals, gorgeous harmonies and an endless supply of precise stop starts and daring hooks. Their melodic and intricate elements within their math pop compositions will simply sweep you away. Each musician flirts with their arrangements and together all four compliment one another. The album boasts a progressive performance throughout, delivered by the pro’s at creating music destined to make you both move and sing along.

Amuse Bouche is a glowing soundtrack to the year’s most celebrated months.

We are so intrigued to find out more about the album, we had the pleasure in chatting to Luke on behalf of the band to discover more about the making of Amuse Bouche, their time together, live shows and more…

Quadrilles are no strangers to Circuit Sweet and we are thrilled to reveal more regarding their forthcoming album release. Before we get to the details of the forthcoming new release we want to get to know more on you- Introduce yourselves, your band and how long have you been creating/performing live?

Quadrilles has been a band for aaaaages, like 8 years or something, Ken is in fact the only founding member… The most recent set up started about 3 years ago, with Luke joining on the drums

You’ve perfected your own unique Quadrilles sound but how would you all describe what that sound is?

It’s been a while and we’ve missed you. With you teasing us about a new record across your social media, besides recording what have you all been up to over the last few months?

Well, half the band have recently had babies, so they’ve been raising babies. The other half have been enjoying full nights sleeping and lots of free time (I’ll let you guess which half I’m in)

This new record in our opinion is flawless! It’s going to impress all those that hear it, but tell us more about your writing process and what has inspired you to create ‘Amuse Bouche’?

This record was definitely a full band effort when it came to writing, we spent a lot of time all in one room crafting these bad boys. Last year we spent 4 days down in Sussex in the Nice Weather For Airstrikes studios, sleeping there and writing all day long. It was really intense, we definitely nearly fell out a number of time over how many times a riff should be repeated… but definitely worth it, the tracks feel much fuller and more together. This is also the first time recording with Luke on drums and it feels so much tighter

What do you think the new release captures?

Will you be supporting the release with any live shows? (If not do you have any planned)

We have no live shows planned

We first caught you guys play live back in 2014/15, what do you think you guys do live which win the crowd over?

Dunno really, I suppose we’re honest on stage and have a great time and I think that enjoyment spreads to the crowd. We also do not take ourselves too seriously, so people like to laugh at us

Personally I love playing Weston-nang-Steed, mainly because I get to scream my throats out at the end

What’s the strangest venue/atmosphere you’ve played too to date?

We once played in a park in south London on a stage that was bicycle powered. Every time we dropped into a heavy bit we zapped all the power and everything cut out. I think that happened about 3 times before we gave up

I love you Chester

A huge thank you to Quadrilles for spending time with Circuit Sweet. We can’t wait for the world to hear this record and we wish the band all the success. Be sure to head to their social media platforms to get this record.