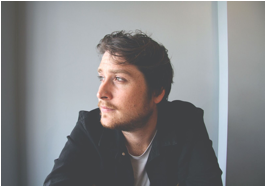 Taken from upcoming ‘Dirt EP’ out later this summer

“If the title track is any indication, the album will showcase Calnin’s free-flowing creativity and knack for creating ambient textures to prop up his voice, which slithers in and out of frame.” Consequence Of Sound

“He knows how to combine an atmospheric ambience with a soulful indie-folk sound. What ties it all together is his voice…” Pigeons and Planes

Having proven himself as one of the greatest new voices coming out of Australia at the moment, thanks to his ‘Waves’ single from earlier in the year, Hayden Calnin has returned to deliver another cut from his forthcoming EP, ‘Dirt’.

Much like ‘Waves’, ‘Collision’ follows the singer-songwriter’s simple formula of a rich and soulful voice over a bed of harmonious guitar playing and a bold atmosphere. With a bellowing voice to introduce the track, Calnin looks to create a lullaby-like serenade that uses minimal production in order to keep you focused firmly on his lyrics and performance throughout.

Speaking about the new single, Hayden Calnin said, “‘Collision’ is maybe one of the hardest songs I’ve ever had to write. I wrote it in secret, not really showing anyone until I was comfortable with how it was sounding. It was never meant to be a song with all the hooks and all the standard rules in song structure that you’re meant to follow. I avoided that and just let it come out naturally. ‘Collision’ is an expression about a really dark time for a friend of mine. And, like my previous single, ’Waves’, following that exploration of mental health in young adults.”

‘Collision’ is due out on the 30th June, and will form part of his forthcoming new EP ‘Dirt’, due out later in the summer.