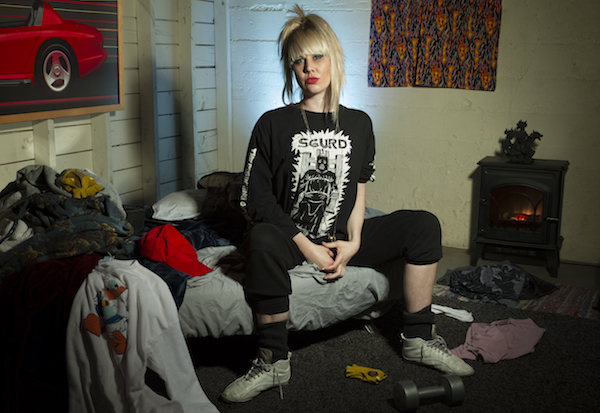 EMA has shared her new song “Down & Out,” the third from her forthcoming new album Exile In The Outer Ring, out August 25th on City Slang.

EMA (Erika M. Anderson) explains the track saying: “People equate ‘worth’ with money.  If you’re not making money, you can end up feeling pretty worthless. It’s a terrible feeling. I feel we need to divorce human value from money and we need to stop treating people like they are disposable.”

In addition to her previously announced European and UK tour dates, EMA has just confirmed a North American co-headlining tour with The Blow this October and November.

I’m excited about this record because it has everything I personally like listening to: fat synth drones, heavy guitar riffs, singsong backing harmonies and narratives about small town leftovers and complex loves; whispered secrets, kids from the void, static turned into melody and layers of crafted feedback,” she says, surmising the this third full length release as EMA, which finds her more confident in her stride than ever before. “This is my language, my sonic signature and psychic soundtrack. I’m ripping off the past 10 years of my own work and I couldn’t be more pleased with the results.”

After the success of 2010’s Past Life Martyred Saints and 2014’s prophetic The Future’s Void, EMA retreated to a basement in Portland, Oregon – a generic apartment complex in a non-trendy neighborhood, with beige carpeting and cheap slat blinds. She returns with a portrait of a world both familiar and alien: The Outer Ring, a pitch-black world of half-empty subdivisions, American flags hung over basement windows, big-box stores and strip malls and rage. In a year dominated by working-class alienation, EMA — a Midwesterner who has never lost her thousand-yard stare — has delivered an album that renders American poverty and resentment with frightening realism and deep empathy.

The Outer Ring is the suburban world of people who’ve been pushed out of city centers by stagnating wages and rising expense, forced up against rural communities swallowed by sprawl. It’s far more diverse than traditional images of “the suburbs” – vape shops and living-room hair salons exist next to Mexican grocery stores and Dollar General. But it’s also more deeply marked by poverty and tension, and by the anger that comes from having your story and your struggles erased from the narrative.

The album, co-produced with Jacob Portrait of Unknown Mortal Orchestra, recalls EMA’s roots in the noise-folk outfit Gowns, whose 2007 album Red State prefigured many of Exile’s core themes, along with its mix of stripped-back folk (“Always Bleeds,” originally a Gowns song), spoken word (“Where the Darkness Began”) and noise epics(“Breathalyzer”).

Exile In The Outer Ring is unique in its mingling of gender politics with American working-class anxiety. The voices we hear in these songs — druggy, surly societal outcasts; Byronic nihilists bringing down fire — speak to a kind of rebellion that’s typically reserved for men, and the archetype of the “rebellious dirtbag teenage boy” dominates the album. Yet EMA claims some of that same dirtbag alienation for women — “a woman who swallowed a scumbag teen boy whole,” as she puts it – and uses it to interrogate both her own vulnerability and how male violence shapes the world, as on “Aryan Nation,” where Exile’s many threads come together. Feminist alienation becomes working-class alienation (if you can’t see yourself in a “famous man,” is it because he’s a man, or because he’s famous?) just as one person’s abuser becomes the systemic abuse of a nation. It’s an expansive vision that brings together concerns from every corner of our present moment – and themes that have recurred throughout EMA’s career, from the brutality of late capitalism to the collapsing boundaries between private and public – into one dark portrait of what it means to be American in 2017.

Even as the album delivers what might otherwise be a total indictment, EMA never loses sight of the possibility of healing; if Exile In The Outer Ring spends a lot of time addressing rage, it also asks what growing up submerged in all this violence does to one’s ability to trust and connect with others (“Receive Love”), or whether it’s even possible to run away from pain (“Always Bleeds”). The result is a deeply personal, confrontational, but ultimately redemptive album from a quintessentially American artist at the peak of her form.

Exile In The Outer Ring will arrive in stores on August 25, 2017 via City Slang and is available for pre-order in multiple bundle packages via Bandcamp and select US/UK indie stores, with previously released tracks “Aryan Nation” and “Breathalyzer” coming as instant grat downloads: https://emaband.lnk.to/outerring.