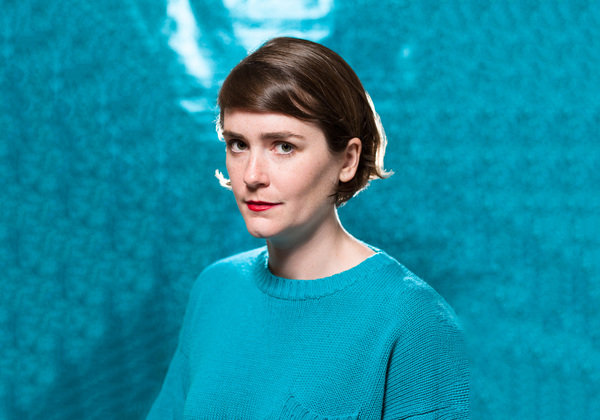 CAROLINE SAYS
SIGNS TO WESTERN VINYL
TO REISSUE DEBUT ALBUM 50,000,000 ELVIS FANS CAN’T BE WRONG
ON AUGUST 4
FOLLOW UP LP DUE EARLY 2018
Alabama-raised, Austin-based songwriter Caroline Sallee, aka Caroline Says, has signed to Western Vinyl to reissue her originally cassette-only debut album, 50,000,000 Elvis Fans Can’t be Wrong, on August 4, before a collection of new material, destined to be her second album, arrives in early 2018 – stream + share “Winter is Cold” via Soundcloud.
After college Sallee took a job as a waitress in Yellowstone as an exercise in solitude and independence.  With the money she saved there, she took a transformative journey via Greyhound to explore the West Coast before returning to Alabama where she would record her debut album in her parents’ basement.  50 Million puts us in the seat right next to Sallee where we can feel the warm West Coast light through the window, the bus route charting the lines between our youth, and our delayed future.
The modern roadblock of moving back in with your parents after college is generally painted in negative colors, often mentioned in news bumps as a sign of the stunted growth of a generation that increasingly sees itself as valueless in traditional economic roles.  What isn’t discussed is how this move can provide us with a renewed perspective on, and clarity about the formative years spent in this familiar space.  Perhaps this temporary return is a cosmic gift to a culture that’s overdue for reminders of its indelible potential – a gift that provides one last opportunity to create art in the nostalgic haze of your youth, before your time and energy are sapped by economic pressures to make it on your own.  Recorded during just such a time, 50,000,000 Elvis Fans Can’t be Wrong is a fruit of this ambivalent phase of early adulthood.
There are rays of youth beaming through this music, but they never outshine a kind of maturity that betrays the fact that Sallee was just 22 years old when 50 Million was made. Our trek starts with album-opener “Winter Is Cold” which somewhat fittingly shares its title with the 1969 Wendy & Bonnie song of the same name. Bouncy, alternate finger-picking marks a gentle beginning, safely and surely generating momentum while setting up the story through a frank quatrain: “I’ve never been to the West Coast, I’ve always heard it’s the best though.” Sallee then immediately confesses the kind of realization that’s a benchmark of setting out into the world alone: “I think it’s okay, just not all they say.”
That kind of dichotomy is at play throughout 50 Million Elvis Fans Can’t be Wrong. Even the album title seems to refer to the contrast between what our elders tell us and the perspectives we form out of our own experiences. There’s a vacillation between idealism and realism, and it expresses itself musically in the hairpin turns from gentle folk into brazen experimental flourishes, like on “Funeral Potatoes.” The track opens with lilting, somber, Satie-esque piano, but at the halfway point, typical choices of song structure and transition are discarded in favor of a screeching, static-washed loop of violin and feedback that transcends the formality of songcraft, becoming something altogether more daring and collage-like.
The more band-driven songs on 50 Million recall an early-1990’s style of production in the way chorus-twinged electric guitars and tight, papery drumbeats point our mind’s eye to the West Coast sunset, like on the mid-album standout “Gravy Dayz”. But what makes these more caffeinated moments special is their constant proximity to gentleness and reflection. Sallee decorates the background of most songs with hushed humming that could stand alone as a minimalist-ambient choral album, and when employed on her songs, elevates the final product to an astral level.
Sallee’s gift lies in pitting the familiar against the unexpected with a delicate assuredness, never compromising the one for the other.  These kinds of debuts can sometimes feel like an over-promise of what is to come, but in the case of Caroline Says there’s clearly plenty more thread to be unraveled. It’ll be a pleasure to see where the next bus ride takes us.