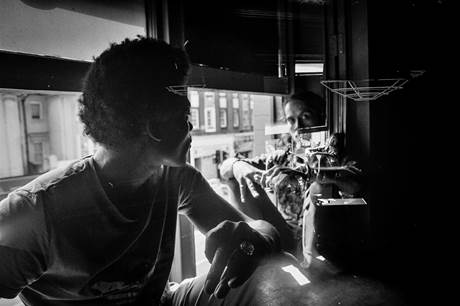 ‘…on the shores of San Salvador’

“Chopped up beats, scuzzed up riffs and torn up vocals” – Clash Magazine

“These guys have it all. Their live show is a beautiful thing to behold with monstrously loud blues guitar, hip-hop break beats and searing vocal hooks, and they’ve managed to convey that very same feeling in their latest single. Reminiscent of ‘Raw Power’-era Stooges and two-piece Leeds legends Wet Nuns, Dirty White Fever are a rock n’ roll phenomenon in its truest form.” – Louder than War

Dirty White Fever, Brighton based two piece Dominic Knight and Leon Holder, fuse garage and blues with their mutual love of old school hip hop, break beats and DFA 1979. A project that has been on the back burner for a number of years, whilst Dominic toured with 80s Matchbox B-Line Disaster and shortly after, Bad For Lazarus and Leon engineered for various venues and bands such as Cave Painting and You Love Her Coz She’s Dead, the time has come for DWF to unleash their rock n’ roll fury on the world.

After the success of their previous singles, Dirty White Fever have now announced their debut album, ‘…on the shores of San Salvador’, released by Roadkill Records on July 21st. A collection of their work to date, the 11 track epic takes you on a journey of blisteringly heavy guitars and the bands signature break-beats.

“Though not the first point of contact with the Americas or even ‘civilized society’ Columbus landing on the shores of San Salvador marked a point in history where the eradication of indigenous and ‘savage’ cultures became a goal all over the world. To speed up progress for these advanced cultures the only answer, from the outbacks of Australia to the Siberian wilderness, was to destroy and eradicate those that live life to a different system of beliefs.

A lack of understanding can lead to fear, and fear can lead to all manner of vile conclusions. From issues of Education, homelessness and celebrity narcissism, ‘…on the shores of San Salvador’ is a look into the depths of our existence as human beings and the love and hatred we share for one another, from the dawn of time into our demise as a species.” – Dominic Knight

With an impressive back catalogue of gig mates including God Damn, The Garden, Entrance Band and DOPE BODY, big future release plans and a fierce drive rivalled by none, Dirty White Fever are the real deal, and they’re poised, set to make 2017 theirs.

The album launch hoested by Roadkill Records is on July 21st at Camden’s The Lock Tavern with Saint Agnes, Skinny Milk and Jay Vee.