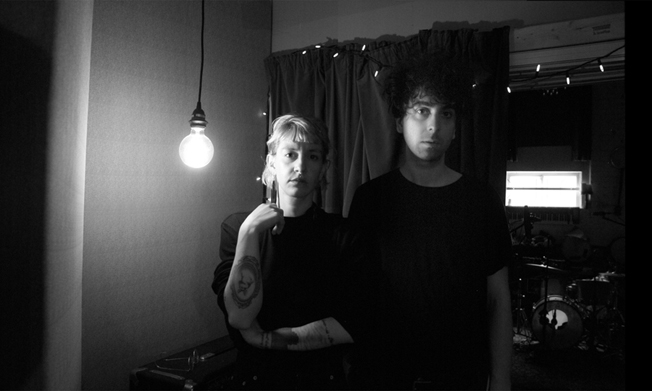 Every band worth sticking with for the long haul, sooner or later has to hit you with the record that reallyturns your head, that one album that dashes your previous expectations to pieces, and gets you excited about the myriad potential musical futures to come.

For Toronto’s Beliefs – Habitat is that record. Seven years and two well-regarded LPs on from the band’s initial formation during a fit of shared affection between co-founders Jesse Crowe and Josh Korody for the swirling overdrive of ’80s-into-’90s noise-pop, Beliefs is poised to explode most of the ‘beliefs’ you might already harbour.  Habitat, their third album deconstructs, remakes and remodels its self-conscious “shoegazer” beginnings in pursuit of an unforgiving, uncompromising and now thoroughly unknowable next phase.

Habitat was finished in a grand total of 16 days, with Korody serving as producer and engineer, studio multi-tasker, Leon Taheny (Austra, Death From Above 1979, Owen Pallett) sitting in as drummer, and Holy Fuck’s Graham Walsh giving the whole affair the same sort of bristlingly immediate final mixdown he’s brought to recent albums by Preoccupations, Alvvays and METZ.

Beliefs previous albums; 2013’s self-titled debut and 2015’s more poised Leaper – which lent a satisfying, Swervedriver worthy visceral punch to the layered, loopy loveliness of My Bloody Valentine and Yo La Tengo – met with considerable acclaim and a brewing word-of-mouth reputation on both sides of the Atlantic.

Lately, Korody has worked behind the boards on smashing records by such fellow Torontonians of note as Dilly Dally and Weaves as well as playing in Wish, Vallens, Breeze, amongst others.

The Quietus called Beliefs recent set at The Great Escape “a compelling concoction of cataclysmically combustive yet cleverly nuanced noise that could just as easily play a supporting role on the next Oathbreaker tour as it could a headline run by Interpol.”

Habitat is released 22nd September on Outside Music.