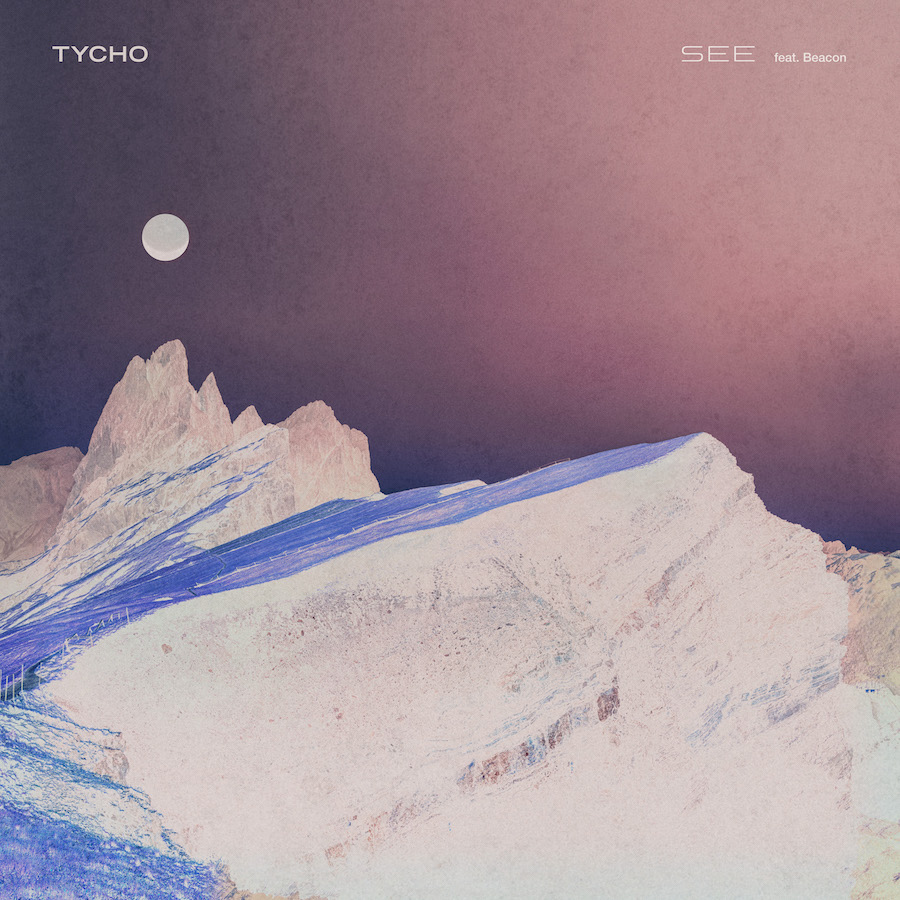 Tycho has announced the release of ‘See (Feat. Beacon),’ the first ever song featuring vocals from the GRAMMY® Award-nominated dance/electronic project. The track is available at all digital music retailers and streaming services today.

‘See (Feat. Beacon)’ began its journey as a instrumental track on Tycho’s acclaimed 2014 album, AWAKE, but soon took on a new form with a bubbly remix from fellow Ghostly International artists Beacon, melding the original track’s serene energy with buoyant dance grooves and gossamer vocals from the New York-based duo’s own Thomas Mullarney III. 2017 saw Tycho and Mullarney team up onstage for stellar live renditions of “See” during Tycho’s remarkable Coachella sets – the band’s first ever performances to see them joined by a vocalist. “See (Feat. Beacon)” was soon re-recorded as a proper collaboration, uniting Tycho’s mesmerizing melodies and stuttering percussion with Beacon’s trademark vocal approach, resulting in an astonishing and altogether original new sound from both acclaimed outfits.

Tycho will celebrate “See (Feat. Beacon)” – as well as 2016’s chart-topping album, EPOCH – with a world tour featuring major festival appearances in Europe at Primavera Sound, Way Out West, Sziget Festival, Lowlands and Pukkelpop. In the United States Tycho will tour the West Coast with Todd Terje & The Olsens and tour the East Coast with Phantogram. For complete details and ticket availability, please see tychomusic.com/#tour.

EPOCH, Tycho’s acclaimed fifth studio album, made an extraordinary chart debut upon its arrival last year, enteringBillboard’s “Top Dance/Electronic Albums” at #1 following its surprise release – Tycho’s highest main chart placement to date. EPOCH further made history earlier this year, earning the Bay Area-based group its first ever GRAMMY® Award nomination as “Best Dance/Electronic Album.” EPOCH – which includes such extraordinary tracks as “Division,” “Horizon,” and the brilliant title piece – is available digitally at all DSPs and streaming services; physical CD and vinyl editions can be found at ISO50 and The Ghostly Store.

Named among Red Bull Music’s “25 Best Albums of 2016“ and Dancing Astronaut’s “Top 10 Albums of 2016,”EPOCH also drew critical acclaim to match its popular success. “A warm, sprightly, immediately engaging album,” wrote Stereogum, while Consequence of Sound hailed the title track, noting “Tycho weaves a diverse fabric of synthesized sounds — some soar like flutes, while others glow like orbs and grind like thick static.” “‘Field’ offers a breezy, atmospheric vibe,” enthused Billboard, “while ‘Receiver” and ‘Rings’ feature a more energetic, upbeat melody to the already electronic-zen tracks.” “It’s fair to say EPOCH is the crown jewel in Tycho’s reigning ambient electronic discography,” declared Exclaim! In a 9-out-of-10 rated rave. “It nicely rounds out the trilogy of LPs they’ve released on Ghostly International, which includes 2011’s DIVE and 2014’s AWAKE, not so much a departure from its predecessors as a further maturation. EPOCH feels like the realization of (Tycho founder Scott) Hansen’s long-term artistic vision, and the album exudes a confidence that clearly shows the band have come into their own.” “The ups and downs of this album lead you in no clear direction,” wrote Earmilk, “which acts only as a testament to their creativity and talent as a band – plain and simple.” “EPOCH probes deeper than (Tycho’s) previous work,” wroteRelix, “triggering as much angst as bittersweet introspection.” “All in all, it’s hard to say what the best thing about EPOCH is,” noted Dancing Astronaut, “The sound design is beautiful, the arrangements are subtle and nuanced, and the overall effect is triumphant, even bordering on transcendent. Suffice it to say that EPOCH sounds like the soundtrack to a science fiction film that we wish we could see, and Tycho has produced one of the most entertaining albums of the year.”