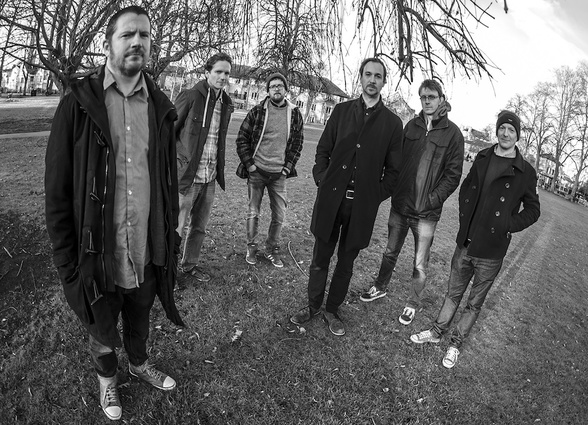 HEY COLOSSUS SHARE VIDEO FOR “POTIONS” FROM THE GUILLOTINE,
OUT NOW VIA ROCKET RECORDINGS
“How these potions make up for a slow decline”
Hey Colossus have just released their new album The Guillotine (Rocket Recordings), and with it, have shared a brand new video (via Echoes and Dust) for the album track “Potions”, which arrives ahead of their album and beer launch at New River Studios in London on Election Day this week. Further live shows shall follow.
If the slapstick and self deprecating humour of previous video ‘Englishman’ was a drunken post-Brexit Britain folly, wryly poking fun at a mis-placed national identity of some kind, Potions is surely the morning after: the bleak, cold sweat, clutching-the-porcelain hangover of Albion: that sinking feeling of remembering where the night before went wrong.  The video makes use of actual CCTV footage, watch it below…
Flourishing where sparks fly between primal rock brawn and artrock grace, Hey Colossus have undergone a spectacular metamorphosis in the last three years. Their latest transmission The Guillotine shows that they’re in no danger of neglecting either their prolific drive or their charismatic flair. Darker and more brooding than their last two records, it’s also perhaps their most richly melodic to date –  the interplay of their three guitar lineup has never sounded more fluent than on these eight songs, nor their songcraft more well-defined.
The end result, captured in the studio by Tim Cedar (Part Chimp) and Ben Turner, is a record whose alchemical charge arrives from a reinvention of loud rock shapes into forms both feral and fresh – whilst Hey Colossus can still bludgeon with overamped vigour, as on the hypnotic and devastating krautrock-Jesus-Lizard hybrid of ‘Back In The Room’, (which also features a guest appearance by none other than Hawkwind icon Nick Turner) they can also deliver the dusky and haunting waltz-time serenade of ‘Calenture Boy’ with uncompromising fortitude, with the new-found confidence and louche allure of Paul Sykes’ vocals at the forefront.
Explorers of a unique sound and invigorating approach in a decade in which cliches and genre pieces in the realm of the psychedelic have frequently surrounded, Hey Colossus stand alone – transcending the limitations of the underground scene from whence they came, whilst exposing the paucity of inspiration in much of the guitar-rock mainstream.  The renaissance of a band now simply an innovative force in the reinvention of heavy amplification finds another peak with these menacing yet immersive songs. Hey Colossus are at their sharpest yet, and no-one will survive The Guillotine.