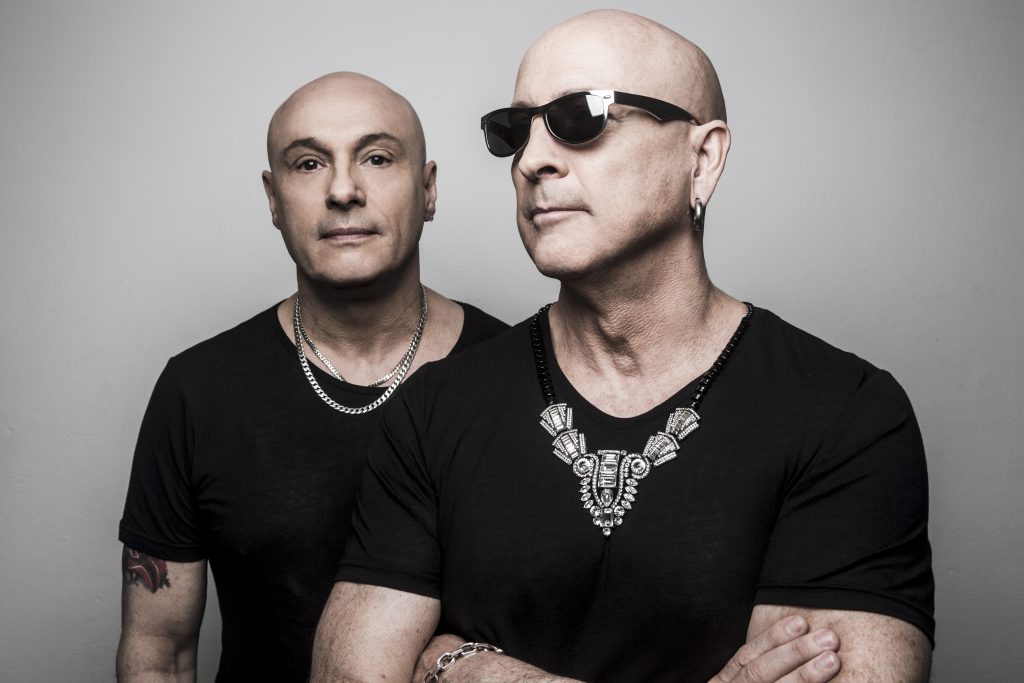 Right Said Fred have released their 9th studio album Exactly!. The album was two years in the making featuring an array of special guests and Fred and Richard Fairbrass’ signature mix of tongue-in-cheek observational pop.

The brothers Fairbrass, who have been making music as Right Said Fred for over 25-years since their 1991 hit I’m Too Sexy, and we all know that song!

Fast forward to 2017 and the pair have just embarked on their latest journey with their new record. To coincide with the release and to delve deeper into the world of Right Said Fred, Gavin Brown spent some time with the musicians to discover more about Exactly!, the recording process and how the outfit kicked off all those years ago…
Q- Your new album Exactly! is out now. Can you tell us a bit about it and it’s sound?
On this album we have worked with Paul Statham, Jason Glover and Gordon Davis. Paul has worked with Pete Murphy and Dido, he brings a darker/indie pop element to the album which we think you can hear in ‘Me&You’ and ‘Silicon Journey’. I suppose we’d describe Jason and Gordon as more out and out pop but ballsier and more rowdy than we’ve been before, this can be heard in ‘We Are Believers’ and ‘I Don’t Wanna Die Right Now’. ‘Raining In England’ we wrote with Clyde Ward, Clyde we’ve worked on and off with for 15 years, he’s a wonderful writer and fun to write with. We’re delighted with Exactly!, we think we’ve retained what we’re good at as well as moving out of our comfort zone… dare we say growing 🙂
Q- What has the reaction to the album been like so far?
This album has received better reviews than any album we’ve ever released. Also the response from fans and friends and family, who generally don’t hold back, has been amazing.
Q- How did the recording of the album go?
We took our time, as we’re independent and self-funding we spread the writing and recording over about 18 months. We recorded at the studios of the people we co-write with, both studios are in SW London.
Q- Will you be touring in support of Exactly!?
We have a brand new band, we’re out and about this Summer playing festivals.
Q- How would describe the Right Said Fred live experience to someone who hadn’t seen you live before?
Although we’re essentially a ‘pop’ band we tend to deliver it more like a rock band. We’re physical and energetic on stage, we don’t use any choreography and we don’t wear suits or knitwear.
Q- What’s your favourite song to play live?
Melanie.
Q- it’s been 26 years since your first hit single I’m Too Sexy, did you think the song was going to be as big as it was?
No, we had no idea. It’s longevity and it’s popularity with different generations plus its ongoing success’s abroad is even more surprising than it being a hit in the first place.
Q- The song has been featured in everything from The Simpsons and Eastenders and even Tom Hanks has done a version of the song. What do you think the songs endearing popularity is?
I think the lyric can be applied to anything and everything, it’s fun to perform, i guess people must also feel that it adds to whatever context it’s used in.
Q- Were you aware that Jay-Z namechecked you on his song The Rulers back with the line “I’m too sexy for jail like Right Said Fred”?
Yes we are aware, ‘I’m Too Sexy’ is held in very high regard in the rap/hip-hop community.
Q- How did you start as Right Said Fred?
RSF first started in 1989. Rich and i were an acoustic duo doing the rounds on London’s pub and music venue circuit.
Q- Who are some of your musical influences?
Bowie, T-Rex, Captain Beefheart, Beatles, Talking Heads.
Q- In your early days as musicians, you were in a band called The Actors and you supported Joy Division in Manchester. Can you tell us about that experience?
That was in 1978, the live circuit was very active and brutal, not for the faint-hearted. Audiences were still spitting at bands back then, it was pretty rowdy, lots of fights and friction.
Q- How did you get on with Ian Curtis and the rest if the band?
They were great, Ian and Fred swapped shirts, we chatted for quite awhile.
Q- You also toured with Suicide. How was that and how did you go down on that tour?
We didn’t exactly fit Suicide’s demographic, that said we did pretty well. We got encores and rebooked.
Q- What were Alan Vega and Martin Rev like as tour mates?
They were very supportive. A couple of times promoters refused to pay us, Alan and Marty stood up for us, we got generally got our money one way or another.
Q- Were you big punk/post-punk fans?
No. Most punk bands were style over content, apart from The Clash, we thought punk was more about fashion than music. It was doomed to fail, you can’t sell music to people who have no income. Then of course the whole ‘anarchy’ aspect of punk became moot when all the punk bands signed to multi-national record labels
Q- What was it like starting out when punk was at its height? Exciting I would guess!
Yes it was very exciting, very vibrant, there were gigs on every high street, most of them were dives but it was a great learning curve, it sorted out the men from the boys.

Q- You have also worked with greats like David Bowie and Bob Dylan. Can you tell us about that?

RICHARD: I was ‘auditioned’ in D’Arbly Street, Soho. Bowie made it clear that my pony tail would have to come off if I was to get the job-so I cut it off!

He was always polite and always seemingly pretty patient. Although fairly ‘distant’ (understandably given he’d done this many times before) he was never off hand or dismissive.
FRED: I got the gig with Bob Dylan through Rupert Everett. Rich and i had both worked with Rupert during his music career. Rupert was then cast for the movie ‘Hearts Of Fire’ starring Bob Dylan. Rupert was kind enough to recommend Rich and i for the role of guitar and bass, the bass player needed equity so Rich didn’t get the part. I’ve always been a huge Dylan fan so working with him was amazing. He hadn’t written the soundtrack so i went to his trailer a couple of times to rehearse the songs with him. That was pretty special.
Q- What were the highlights from that time in your career?
I’m not sure it get much better than working with Bowie and Dylan.
Q- You made cameos in Life’s Too Short with Ricky Gervais and Warwick Davis, how was that experience and how did it come about?
That was great fun, Ricky Gervais, Stephen Merchant wand Warwick Davis were so friendly and engaging. There was a lot of giggling and fun on set, they made it very easy and were very professional. We got the roles because they asked us..:)
Q- Would you like to do more acting roles in the future?
We’re not sure what we’ve done on screen could be classed as acting. We do enjoy it but to be honest we prefer the creative process more than the execution.
Q- What are your plans for the rest of 2017?
We are playing some UK Summer festivals, (Bestival, Cornbury, BARE in The Woods etc) then we will be releasing a second single and doing another UK Radio Tour in September. We’re also very excited about a film script we’re involved in, it’s starting to get a lot of attention.
Q- Any final words for all your fans out there?
We really appreciate the ongoing support and encouragement we receive, it’s amazing to have such loyal people in your life.
Thank you to Right Said Fred and to Gavin Brown.
https://www.rightsaidfred.com/