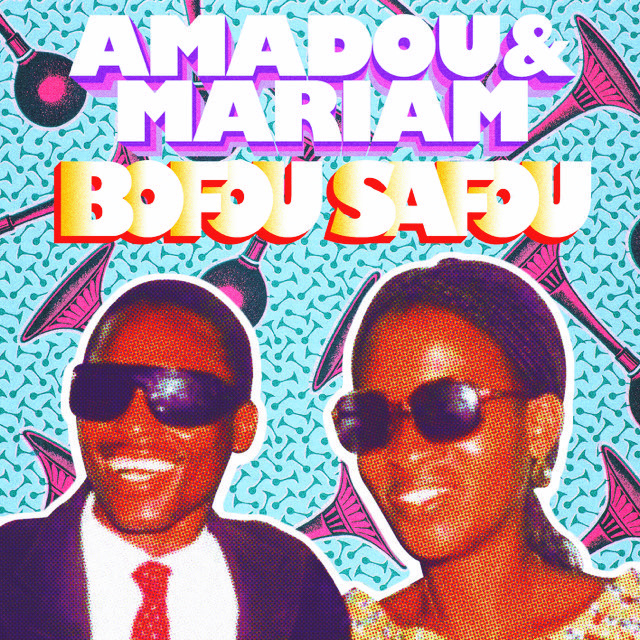 AMADOU & MARIAM
‘BOFOU SAFOU’ EP OUT 9TH JUNE ON BECAUSE MUSIC
HEAR HENRIK SCHWARZ REMIX
THE TROXY, LONDON 4TH NOVEMBER
NEW ALBUM ‘LA CONFUSION’ DUE LATER IN 2017 ON BECAUSE MUSIC
“Disco electro corker” – Mojo
“Leave it to Amadou & Mariam to know just how to balance the weight of a message with the pull of the dance floor” – Pitchfork
Amadou & Mariam will release their ‘Bofou Safou’ EP through Because Music on 9th June. Following a sensational sold-out show at Koko, the duo have confirmed an additional London show at The Troxy on 4th November. Ticket go on sale today and are available here.
EP title track ‘Bofou Safou’ was recently released as a single and represented the duo’s first new material in five years. Acclaimed German producer and DJ Henrik Schwarz’s remix of ‘Bofou Safou’ can be heard here:
Commenting on the remix Henrik reflected, “Isn’t it something really special when you can do remixes of artists you really love? And isn’t the original ‘Bofou Safou’ a wonderful track to do a remix of? I felt blessed when I got asked to do this remix – what a pleasure! I am hoping everyone can hear that …”
‘Bofou Safou’ EP Track Listing:
1. ‘Bofou Safou
2. ‘Filaou Bessame’
3. ‘Bofou Safou’ (Henrik Schwarz Remix)
4. ‘Bofou Safou’ (Africaine 808 Remix)
5. ‘Bofou Safou’ (Lully Remix)
6. ‘Bofou Safou’ (Fatima Yamaha Remix)
7. ‘Bofou Safou’ (Vasco Remix)
Readying an album of new music due later in the year, Amadou & Mariam have confirmed a string of international live dates. The duo have also just announced an additional London show at The Troxy on 4th November.
10 June – Festival Notes en Vert – La Rochelle, France
11 June – We Love Green Festival – Paris, France
07 July – Pyrène Festival – Bordes, France
03 September – End of the Road Festival – Dorset, UK
04 November – The Troxy – London, UK
Amadou & Mariam met in 1975 while attending the Institute for Young Blind in Bamako (where they continue to play an annual benefit concert).Influenced by the records of Jimi Hendrix and Pink Floyd as well as traditional African music, the couple began working as a duo in 1983. Their transition from world music stages to rock festival headliners came with 2005’s Manu Chao-produced ‘Dimanche à Bamako,’ one of the best-selling African albums of all time.
In recent years, Amadou and Mariam have toured with Coldplay and U2 and jammed with musical heroes David Gilmour and Johnny Marr. They’ve performed at a Nobel Peace Prize concert in honour of Barack Obama, and played at the opening ceremonies of the last two FIFA world cups. Manu Chao and Damon Albarn have lent their production skills to their records and they have worked with some of the most innovative names in contemporary rock music via Albarn’s ‘Africa Express’ and other cross-cultural projects, such as ‘L’Afrik C’est Chic’.
http://www.amadou-mariam.com