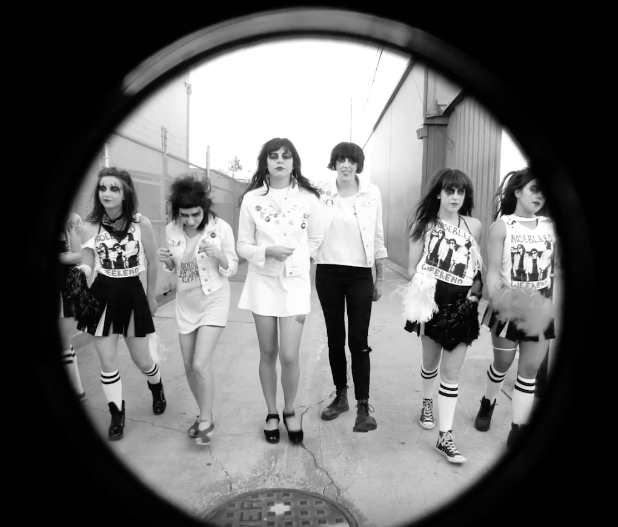 With a huge European tour kicking off next week, including 10 UK dates, Atlanta punks THE COATHANGERS have shared a new video for ‘Captain’s Dead’.

Taken from the forthcoming Parasite EP, out June 30th on Suicide Squeeze, the video for ‘Captain’s Dead’ combines the track’s sultry verses, triumphant chorus, and bombastic freak-out of noisy guitar with ghoulish visuals.

“The song is about a very interesting and difficult time of personal transition that happened at the end of last year, which coincided with a changing political climate ushered in by the election of Donald Trump as president,”guitarist/vocalist Julia Kugel told Paste. “It was like the Trump ethos of savage ignorance was taking over every aspect of life, and then a realization that all things do circle and come back. The reward for malicious action is often a bag of shit, one way or another.

The video was shot by good friend and longtime Coathangers collaborator Matt Odom in and around our house in Long Beach. The badass cheerleaders were a play on the whole captain of the squad thing. We wanted this video to be a bit random and weird to the observer, yet the clip soaked in personal meaning. feels a bit like a feverish nightmare… a hex on assholes.”

When The Coathangers first stormed on the scene over a decade ago, their power resided in their ability to craft a crooked hook out of a grimy guitar line, a delightfully crass chorus, or an enticingly ham-fisted drum-and-bass groove. With each successive album, the Atlanta garage punk ensemble has increasingly tempered their brash charm with sharp-witted pop. Not that the band ever fully excised the primal howl of The Gories or the sparse strut of ESG, but with the trio’s latest EP, Parasite, The Coathangers explore the space between their initial unbridled expressionism and their recent nuanced song craft. “I’d like to think the EP takes you on a journey through the band’s existence,” says guitarist/vocalist Julia Kugel of the sequencing of the five songs on their latest offering.

Suicide Squeeze is proud to offer Parasite as a one-sided 12” on Sea Green vinyl with a b-side etching with an initial limited pressing of 2000 copies. The EP is also available digitally. Parasite is available worldwide on June 30th, 2017.