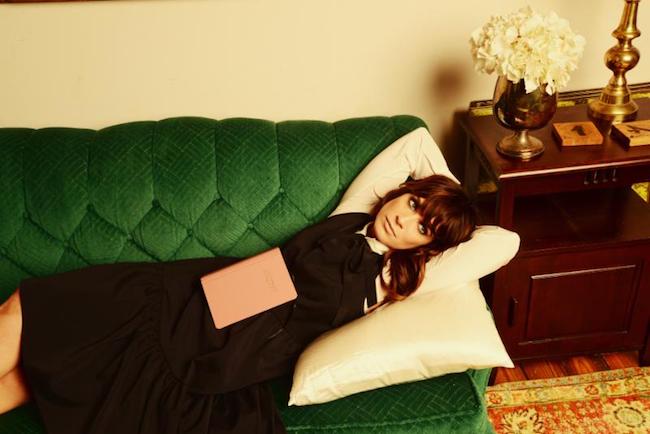 NICOLE ATKINS
NEW ALBUM ‘GOODNIGHT RHONDA LEE’ OUT 21 JULY ON SINGLE LOCK RECORDS
HEAR TITLE TRACK
Single Lock recording artist Nicole Atkins is set to release her new album, ‘Goodnight Rhonda Lee’, on 21st July. Produced by Niles City Sound (Leon Bridges), with additional mixing by Ben Tanner (Alabama Shakes) in Fort Worth, TX, the album feels like an instant classic brimming with timeless songs that were written during a time of deep self-examination for the New Jersey native, now Nashville resident. Fans can receive the first song from the collection, the album’s title track, as an instant download when they pre-order the album.

Nicole experienced a life-changing journey on the way to making this album, which she recently shared with Rhett Miller of the Old 97s. In Rhetts’s words: “To borrow a phrase from heaven’s new poet laureate, Leonard Cohen, Nicole Atkins was ‘born with the gift of a golden voice.’ But somewhere along the way she misplaced it. ‘Goodnight Rhonda Lee’ is the story of Atkins finding her voice, and how, in doing so, she went a little crazy.”

“This record came to me at a time of deep transition,” says Atkins. “Some days were good, some not so good. What I did gain, though, from starting to make some changes and going inward, and putting it out on the table, was a joy in what I do again. Joy in the process and a newfound confidence that I don’t think I’ve ever had until now. The album title, ‘Goodnight Rhonda Lee’, also came from those feelings. Rhonda Lee was kind of my alias for bad behavior, and it was time to put that persona to bed.”

In the midst of much personal turmoil – getting sober, her father’s cancer – Atkins moved from her native Asbury Park to Nashville. Having spent more than a decade as the de facto queen of Asbury, she was finally leaving the warm, but often stifling confines of her hometown. In Nashville, Atkins’ once hectic life was very different. Left home alone as her tour manager husband plied his trade out on the road, Nicole found herself writing songs that examined “feelings of separation and being scared of new surroundings.”

Unsurprisingly, her sobriety faltered. She drifted in and out of it. Atkins knew the wagon was good for her, but she had a hard time staying focused on what was good for her. As it went on however, the clarity of those sober days started to shine through. And she was able to string them together in longer stretches. For the first time, she was able to offer a shoulder for others to lean on, rather than always being the one in need of a shoulder. It helped that she had to be strong for herself in order to be strong for her dad.

She reconnected with her old friend Chris Isaak who encouraged her, in the midst of all the soul-searching and soul-baring, to write songs that emphasised the one trait that most sets her apart from the mere mortals of the industry, telling her, “Atkins, you have a very special thing in your voice that a lot of people can’t or don’t do. You need to stop shying away from that thing and let people hear it.” To that end, the two of them collaborated on ‘Goodnight Rhonda Lee’s’ standout track, the instant classic, “A Little Crazy,” that Atkins shared late in 2016.

The direction in which these songs were headed was obvious. Nicole’s voice had always recalled a classic vinyl collection. She is the heir to the legacy of “Roy Orbison, Lee Hazelwood, Sinatra, Aretha, Carole King, Candi Staton.” She is untethered to decade or movement or the whim of the hipster elite.

In order to capture the timelessness she sought, Nicole enlisted a modern day Wrecking Crew: Niles City Sound in Fort Worth, TX, who had just risen to national acclaim as Leon Bridges’ secret weapon. “We spoke the same language. We wanted to make something classic, something that had an atmosphere and a mood of romance and triumph and strength and soul.” The album was recorded in five days, live to tape. The album that Nicole and the boys came up with in those five days, ‘Goodnight Rhonda Lee’, is nothing less than great art and a quantum leap forward for Nicole Atkins who, no matter how much she grows up, will always be a little crazy.