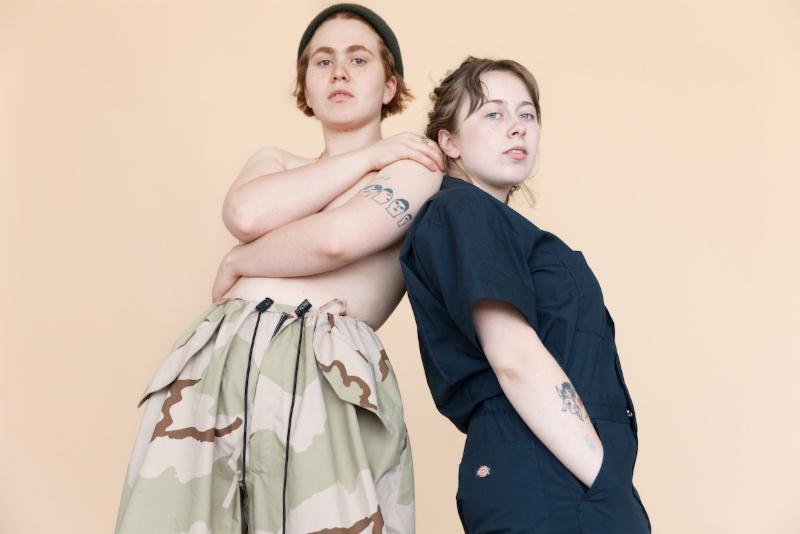 POWERPLANT OUT MAY 12TH ON ANTI- RECORDS

Girlpool have released a video for “Powerplant,” the title track from the long-awaited follow-up to the band’s critically acclaimed debut album. Video director, Philip Steiger says the “music video is a meta-narrative nightmare exploring the power dynamics and manipulation behind an insincere candidness.”Powerplant is available for pre-order now and out via ANTI- Records on May 12th.

The band has also announced a full European tour in September. All dates below.

Life has been a whirl for Girlpool since the release of their acclaimed 2015 debut Before the World Was Big. Shortly before the record came out, Harmony Tividad and Cleo Tucker relocated from their hometown of Los Angeles all the way across the country to Philadelphia, where they quickly became embedded in the local D.I.Y. scene. “Before BTWWB, I was just out of high school, living in my old neighborhood,” recalls Cleo Tucker. “Then we started touring in a way we’d never done before. I really started to experience the duality that was beginning to exist in my life: tour/not on tour.” After a chaotic and informative year spent floating around the East Coast, both bandmates moved home to California at the start of 2017. Girlpool have been seemingly everywhere at once, exploring all the world’s offerings with open minds and notebooks. All the lessons they learned, about the earth and about themselves, are gathered together in their sophomore record and ANTI- debut, Powerplant.

Over 10 days in August 2016, Girlpool holed up at Los Angeles’ Comp-ny studios to record and mix Powerplant with Drew Fischer. For the first time, Harmony and Cleo were joined by a third performer, drummer Miles Wintner, a friend who easily meshed with the tightknit duo. The decision to add percussion came as a natural decision for Harmony and Cleo; “Cleo and I just were driving down the New Jersey turnpike when she mentioned that it might be exciting to expand our sound for the new songs,” says Harmony. “The songs we were writing had the potential of getting really climactic,” adds Cleo. “I think percussion adds a new part of the musical dynamic that we want to explore.”Girlpool’s eagerness to evolve should come as no surprise; in the same way that there were little traces of their self-titled EP on BTWWB, on Powerplant, the pair shed their old skins with more eagerness than before. “In some ways I feel more courageous and mature and in other ways I feel smaller and softer, sometimes even more fragile than ever,” says Harmony, adding that while the inner self is always changing, ultimately the end is a closer self-truth.

The 12 tracks that compose Powerplant grow and burn with greater fire than the duo have possessed heretofore. Both bandmates were heavily inspired by Elliott Smith, the Cranberries, the Cocteau Twins, Brian Eno, Arthur Russell, and Graham Nash; the influence of each appear in the record’s deliberate and intricate guitar work (“Fast Dust,” “She Goes By”) as well as its embrace of dissonant noise (“Corner Store,” “Soup”). Though they were living apart for most of the writing process, the pair still managed to write all but four songs together, another testament to their dedication to Girlpool and each other. Now 21 and 20, Harmony and Cleo confront projections, despondency, apathy, romanticization, love, and heartbreak with a more devastating emotional pragmatism than before. “Looking pretty at the wall is my mistake in love installed/While the moth doesn’t talk but in the dress the holes you saw,” they sing on opener “123,” perfectly refracting the truth. More humorous (but still heavily symbolic) lines are delivered with equal poignancy, like Harmony’s disclaimer on “It Gets More Blue,” “The nihilist tells you that nothing is true/I said I faked global warming just to get close to you.”

Both bandmates believe that radical vulnerability and honesty are essential to discovering oneself. “I see vulnerable softness as a place where the honest self can come forward,” Cleo explains, saying that on Powerplant, Girlpool aimed for sincere expression. “As a society I feel that we perceive softness and vulnerability as traits that are ‘weak,’ and people emotionally disconnect themselves in order to avoid going through everything they feel,” Harmony adds. “I think what is most important right now is empathy, and in order to have empathy we must first feel what we, ourselves, feel.” Perhaps what really makes Powerplant a home run is that Girlpool understand exactly how to use their incisive lyrics, soft textures, hushed harmonies, and soaring hooks for maximum emotional impact. In these moments, when Harmony and Cleo’s voices join together to deliver transcendent transmissions straight from their hearts, Girlpool become a league of their own.