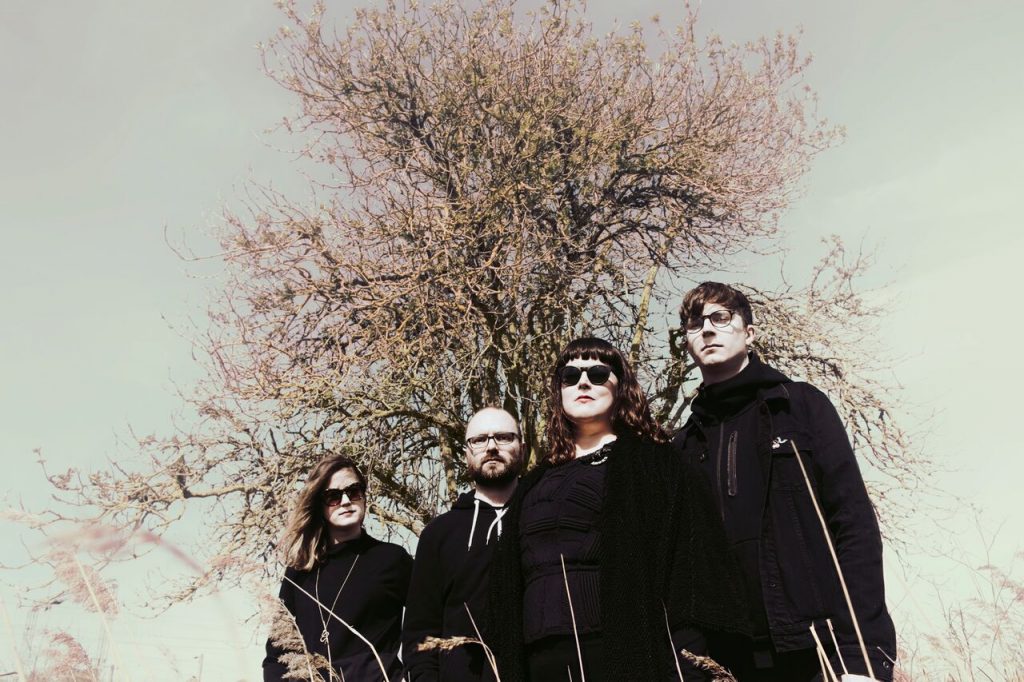 Latest signings to London label New Heavy Sounds (Black Moth, Limb, Mammoth Weed Wizard Bastard), stoner sludge four-piece Ex People have shared the 2nd track from their upcoming debut album ‘Bird’ set for release on 19th May.
‘Not A Drill’ is the opener to the record and is described by the band as a track which, ‘veers from noise rock to doom and all points in-between, but this track kicks things off on the more stoner rock end of the spectrum. The world seems like it is in an really uncertain place right now and lyrically this track is about trying to stand up and organise. The final third features an avalanche of fuzz and wah pedal to give you that warm, happy glow inside.’ Listen online now:
Emerging from the London DIY scene, vocalist Laura and drummer Vicki first met playing in series of riot grrrl and noise bands, before forming Ex People in 2015 with guitarist Calum and bassist Ed. Since then, the quartet have gone on to share stages with the likes of Palehorse, Lower Slaughter, Torpor, and Church of the Cosmic Skull.
The band self-released a digital single “Without/Surekill” in late 2016, which was championed by Terrorizer, Echoes and Dust and The Sludgelord as well as picking up airplay on stations including WFMU and Resonance FM.
Ex People also wrote and released a video for Without, directed by DIY filmmaker Jojo Khor, about a teenage runaway joining an all-female cult led by the band’s singer, Laura.
Now for NHS, the band have delivered a bruisingly assured debut album.
‘Bird’ was recorded with Wayne Adams (Vodun, USA Nails, Death Pedals, Casual Nun) at Bear Bites Horse Studios, and he’s managed to perfectly capture the visceral weight of their sound, a startling amalgam of super filthy fuzz thick riffs, grunge, noise rock and stoner, combined with a punk attitude.
Taking their cue from bands as diverse as Electric Wizard, Bardo Pond, Harvey Milk and Kylesa, along with 90s sludge such as the Melvins (yet still managing to sound cohesive) the ten tracks that make up ‘Bird’, combine stoner hooks and soaring vocals with a crushing heaviness.
Add to that some thumping motorik beats (almost like a heavy ‘Neu’ at times), shot through with an ever-present melodic sensibility, and you have a band that once again shows that when it comes to heavy music, all gates are open.
Lyrically Laura draws on apocalyptic and dystopian themes, with “Over” telling the story of a planet colliding with the earth, sung over a driving, crunching circular riff.
Other tracks tackle real-world horror, with “The Host” about a woman and child escaping domestic violence, and opening track “Not a Drill” calling for resistance against oppressive regimes.
And album closer ‘Crested’ is as dark as it gets, 8 minutes of full on doom meets discord, combining the atmospherics of Windhand with the slowed down hardcore of My War-era Black Flag.
‘Bird’ is gloriously heavy, fuzzed up yet melodic, at times bleak and thrilling as it is infectious.
It’s a bold statement of intent, and we are stoked to add Ex People to the NHS roster. Bird is released on 19th May. Pre-order now:
http://www.newheavysounds.com/