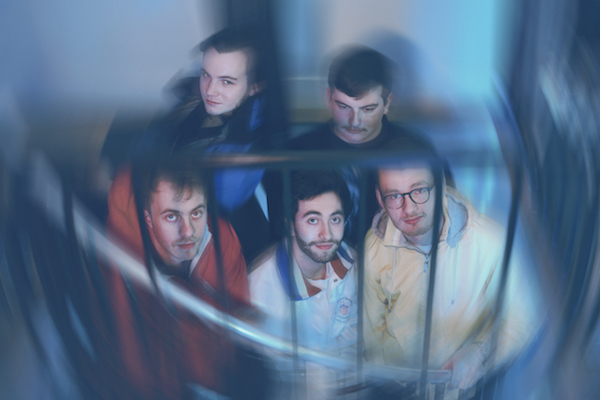 PSYMON SPINE
DEBUT ALBUM ‘YOU ARE COMING TO MY BIRTHDAY’ OUT ON 09 JUNE ON AXIS MUNDI RECORDS
WATCH NEW VIDEO FOR ‘ERIC’S BASEMENT & SECRET TUNNELS’
Brooklyn experimental pop band Psymon Spine are relasing their debut album ‘You Are Coming To My Birthday’ on June 09th on Axis Mundi Records.
Their constantly shifting sound is informed by the band’s varied musical backgrounds, which range from house music to punk, hip-hop, minimalism, West African music, Tropicália, gamelan, and more.
The band have now shared new video for album track ‘Eric’s BAsement & Secret Tunnels. “It’s a super exciting feeling when you come across something that looks the way you’d like your music to sound. We felt a really strong connection to (director) Erin Barry’s work from the get-go because of how visually striking, expressive, and open-ended it is. Everything you see in the video was painted by hand and animated via stop-motion. Erin also painted the artwork for our forthcoming album ‘You Are Coming To My Birthday’“.

Founding members Peter Spears and Noah Prebish had only known each other for a handful of weeks when, through a series of strange events, they found themselves on a headlining European tour together, playing electronic music under Prebish’s other project, Karate. Their first song as Psymon Spine was written in a Parisian hostel, and it was after their London show that they were offered their first record deal.

Following the tour, the project was expanded to a 5 piece band, ultimately including Devon Kilburn, Nathaniel Coffey, and Prebish’s lifelong friend and partner in Karate, “Brother Michael” Rudinski. In 2013, the band met and began collaborating with Graham Dickson of London-based band Crystal Fighters, who would go on to start Axis Mundi Records and sign Psymon Spine. The next several years would be spent writing and recording their album, touring, DJing, and performing with the likes of Mr Twin Sister, Crystal Fighters, Is Tropical, Juan Maclean, Guerilla Toss, and MGMT’s Andrew VanWyngarden.

The title of the band’s debut LP, ‘You Are Coming To My Birthday’, was inspired by an ominous note handed to a friend of the band by one of her young students. The album comes out June 9, 2017, on Axis Mundi Records.