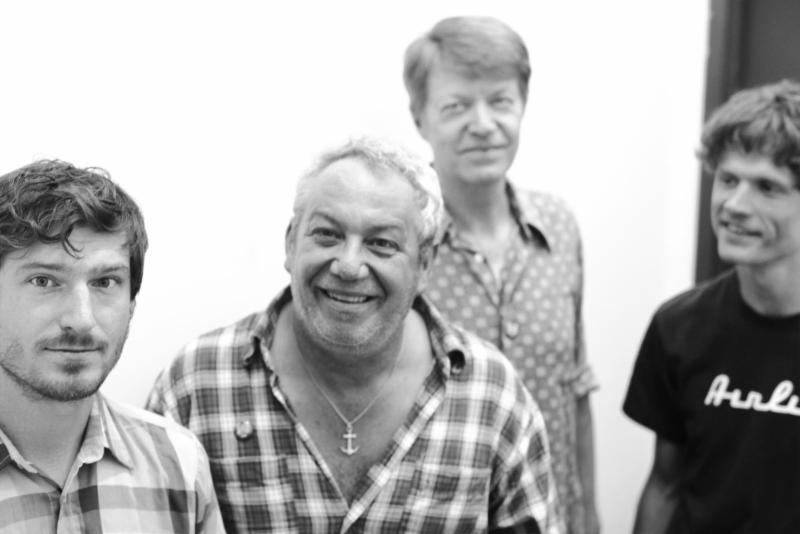 Four exceptional musicians whose work spans multiple genres and generations, Big Walnuts Yonder is a monumental endeavor that’s more than the sum of its parts. The results are a truly epic album defying categorization, where one might hear elements of proto-punk, free jazz, power pop, experimental music, psych-rock and your first teenage acid trip all in one.

The album was recorded in just 3 days in summer 2014 in Brooklyn, NY with producer and former Pere Ubu bassist Tony Maimone engineering at his Studio G. “It was this concentrated sort of freakout,” Saunier says. “We basically had to invent a new band on the spot. And, people might have a stereotype of what each person does, but we all showed up to do what we’re prevented from doing in other groups.” The band would play through each song a couple of times to make up parts, then hit record. “Nels can improvise with anything,” Watt notes. “It was trippy to watch the huge pedal dance! Both those guys have like 35 pedals each. And, Greg’s not just a drummer man, he’s incredible.” The album’s 10 tracks were recorded primarily live with very few overdubs. Although Big Walnuts Yonder was created under somewhat spontaneous circumstances, the group endeavored to ensure the album wouldn’t sound like a jam session. “It was very clear among us,” Saunier notes: “Let’s not overindulge and make it a ‘musician’s recording’.”
Asked how he might describe Big Walnuts Yonder, Cline succinctly nails it on the head: “It’s sick. It has an extreme quality and kicks ass.”
Big Walnuts Yonder features a cover illustration by punk art legend Raymond Pettibon. The album will be available on LP, CD and download on May 5th, 2017 via Sargent House. Physical pre-orders are available at bigwalnutsyonder.hellomerch.com