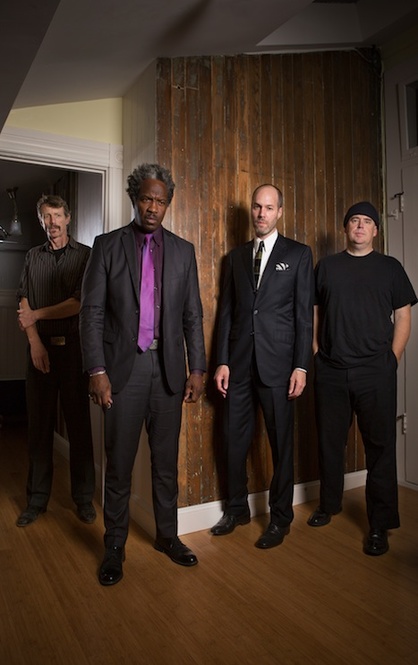 OXBOW SHARE VIDEO FOR NEW SONG “OTHER PEOPLE”,
THIN BLACK DUKE OUT 5/5 VIA HYDRA HEAD
Legendary bay area experimentalists Oxbow have shared a video for new song “Other People,” (directed by Chris Purdie), an intense, slow-burning track from the band’s upcoming album Thin Black Duke, their first album in ten years, out May 5th on Hydra Head.
WATCH: OXBOW – “OTHER PEOPLE” VIDEO
LYRICS
There are some who will confuse talk of love
With love
Looking not so carefully
And there’s a shiver in here
Oh a shiver
Beyond the honeyed reality
That there’s nothing warm in here
He turns and returns and there is
a residual tenderness for the man with the ax handle
He turns to you and on you
It’s so cold in here
It’s so cold in here it seems hot in here
and moves beyond the eventuality
That there’s nothing good in here
There are some who will confuse that which is loved
with that that loves
and the crawling happens not so carefully
While he turns and returns a cold burn
A cold, cold burn
VIEW PREVIOUSLY SHARED VIDEO – “COLD & WELL-LIT PLACE”
PRE ORDER THIN BLACK DUKE VIA HYDRA HEAD
Over the 30 years of Oxbow’s operations, no one has come comfortably close to classifying the Bay Area group. This could arguably be the result of Oxbow’s ongoing evolution, but accurately describing any particular phase of the groups’ seven-album career is no easier than describing the broader metamorphic arc of their creative path, modifiers like “noise”, “avant garde”, and “experimental” frequently get tossed about, but even honing in on a head noun any more specific than “rock” becomes problematic. Sure, the band employs the standard rock choices of instrumentation and displays the requisite evolutionary tie to the blues, but such vague designations mean little. So it’s tempting to attach the only-slightly-more-specific handle of ‘punk’ to Oxbow, if one’s view of punk is narrowly focused on the kind of free-jazz inflected antagonism later-era Black Flag inflicted on the nascent American hardcore scene. But punk’s primitivism is completely at odds with Oxbow’s highly disciplined approach. This is especially true with their seventh album Thin Black Duke, where Oxbow’s elusive brand of harmonic unrest has absorbed the ornate and ostentatious palate of baroque pop into their sound, pushing their polarized dynamics into a scope that spans between sublime and completely unnerving. This is new musical territory for all parties involved.

“Certainly we all became increasingly aware that none of us are getting younger,” says guitarist Niko Wenner. Recognising one’s own mortality can render one’s art to the ranks of ephemera, but Oxbow lashed out at such notions. “For this record I wanted to go even further in the way we always make recordings, as music that hangs together over an entire album, ‘large scale coherence’ if you will,” Wenner says of his compositional strategy. “I was inspired by pieces like Bach’s Goldberg Variations and the formal technique in classical music where a small idea, a kernel, is reiterated, morphed, expanded and truncated, to make a piece of music permeated with the potent perfume of that small element.”

Oxbow’s principle duality can be seen in the conflicting creative strategies of Wenner, who serves as the band’s highly disciplined composer and arranger, and Eugene Robinson, Oxbow’s imposing vocalist and lyricist. Wenner is prone to discussing the specific process behind the songs, the co-production duties shared with Joe Chiccarelli (Beck, Frank Zappa, Morrissey), and the operas that seem most congruous to Thin Black Duke. Robinson, on the other hand, begins the discussion of the album by saying“lucre and cash, the twin fuels that fund all of our excessive shames and glories undergird a terrible kind of amoral economy that helps you make total sense of why you might be murdered for $100.” While Thin Black Duke’s elaborate compositions were years in the making, Robinson’s vignettes about “the places where all that glitters IS gold, and evil is a quaint concept born of a moral framework in a place that is shorn of morality” were born over a decade ago. Written without any song structures in place, the sordid details are howled, bellowed, growled, and spat out in a manner that seems to defy the rigorous order of the music.