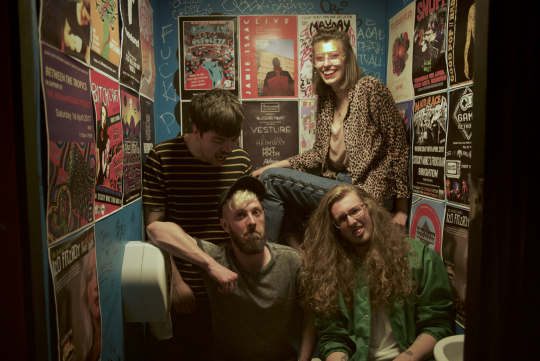 “‘Darling’ is an absolute doozy … managing to cram approximately 5 killer hooks into the space of a single song.” DIY

“The band’s whip-smart math-pop is all glistening surface and immediate melody, but beneath this chrome-plated chassis lies a complex rhythmic engine.”Clash

With the success of early singles ‘Peggy’ and ‘Honey’ Orchards have blazed a trail for themselves as one of the most exciting alt. pop acts in the UK scene; with new cut ‘Darling’ they’re further coming into their own, as evidenced by their stint supporting NYC duo PWR BTTM on the UK and France legs of their European tour.

Other highlights have included sharing the stage with Meet Me In St Louis, Alpha Male Tea Party and White Lung, whilst also appearing at festivals such as A Carefully Planned Faestival, TRUCK and YNOT. Furthermore, slots at Edinburgh Fringe and playing as part of the global stripped-back music series Sofar Sounds highlight the band’s versatility and skill.