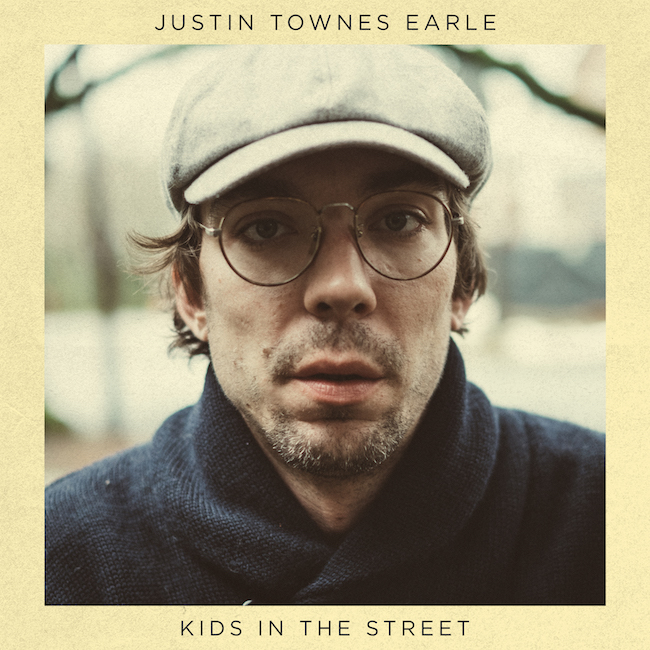 JUSTIN TOWNES EARLE
SIGNS TO NEW WEST RECORDS AND RETURNS WITH NEW ALBUM ‘KIDS IN THE STREET’ ON 26 MAY 2017
HEAR ALBUM OPENER “CHAMPAGNE COROLLA”
Justin Townes Earle has signed to New West Records and is set to return with new album ‘Kids In The Street’ on 26th May. The 12-song set was produced by Mike Mogis (Bright Eyes, First Aid Kit) at his ARC Studios, and is the first time in his career that Earle has worked with an outside producer.
‘Kids In The Street’ marks a decade into Earle’s recording career and follows his acclaimed companion albums Single Mothers and Absent Fathers (2015). The deeply soulful set is both emotionally riveting and effortlessly uplifting. Now embracing sobriety, marriage, and impending fatherhood, Earle is enthusiastically looking to the future. “Life has changed a lot for me in the last few years,” Earle reflects. “I got married and am getting ready to become a father, and this is the first record that I’ve written since I’ve been married. There’s definitely an uplifting aspect to this record in a lot of ways, because I’m feeling pretty positive.” He continues, “When I wrote songs in the past, I was looking in on what I was feeling, but this record’s more about looking outward on what’s happening, and writing about subjects like gentrification and inner city strife. This record also has more of a soul influence to it, and it’s got a deeper connection to the blues than anything I’ve done before.”
‘Kids In The Street’’s opener ‘Champagne Corolla’ was premiered on Noisey and you can listen to it here:
LISTEN TO ‘CHAMPAGNE COROLLA’ ON YOUTUBE \ SPOTIFY \ SOUNDCLOUD
‘Kids In the Street’ will be available digitally, as well as compact disc and vinyl. The album is now available for pre-order via PledgeMusic including an exclusive, limited edition colored vinyl version of the LP, special 7” single including ‘Maybe A Moment’ as well as Earle’s reading of Paul Simon’s ‘Graceland’, and cassette.
Several of the songs on ‘Kids On The Street’ reference the lower-middle-class Nashville neighborhoods of Earle’s youth, which in recent years some say have lost their character to the creeping scourge of gentrification. Significantly, the album is the first of Earle’s not recorded in Nashville. “It’s the first time that I’ve worked outside of my usual umbrella of people to make a record,” Earle explains, adding “In Nashville, if you have the right connections, it’ll spoil the shit out of you, because you’ve got access to the best musicians in the world and the best studios in the world. If you had told me when I started making records, that I wasn’t gonna make every record in Nashville, I would have told you you were crazy. And if you’d told me that I’d end up making a record in Omaha, I’d tell you you were out of your freaking mind”.
New West Records President John Allen stated about Earle’s signing to the label, “When I first met a young Justin Townes Earle, it was evident then he was intent on following his own artistic path. As his publisher, I saw his songwriting evolve to a literary depth and swagger that maintained that unique vision. New West is very proud to release Justin’s next album of his best work yet.”
Earle’s fierce fidelity to his creative muse has been a consistent thread throughout his young life. Born in Nashville in 1982, he grew up as the son of country-rock iconoclast Steve Earle, who gave him his middle name in honor of his mentor, the brilliant songwriter Townes Van Zandt. Justin quickly came into his own as a songwriter and performer, displaying a natural talent for deeply revealing lyrics that reflected his often-harsh life experiences, and a musical approach that effortlessly integrated elements of blues, folk, and country. His 2007 debut EP Yuma set the stage for a steady stream of acclaimed albums.
Justin Townes Earle will take to the road in the States this Spring with his longtime guitarist Paul Niehaus alongside The Sadies as his backing band, with UK and European dates t be announced soon.
‘Kids In The Street’ Track Listing:
1. Champagne Corolla
2. Maybe A Moment
3. What’s She Crying For
4. 15-25
5. Kids In The Street
6. Faded Valentine
7. What’s Goin’ Wrong
8. Short Hair Woman
9. Same Old Stagolee
10. If I Was The Devil
11. Trouble Is
12. There Go A Fool
www.justintownesearle.com
www.facebook.com/justintownesearle