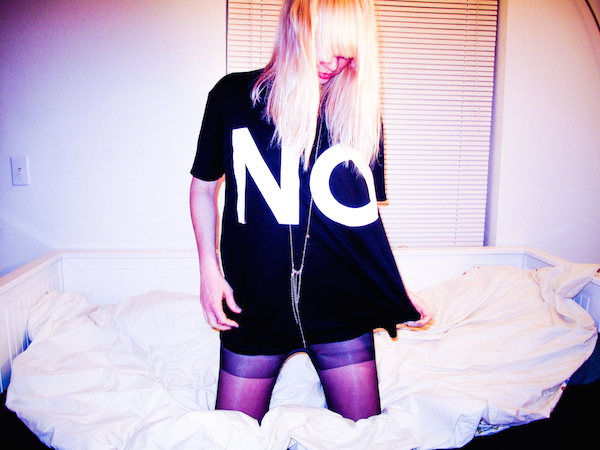 “This is for my people in the middle country. I don’t look down on, or laugh at, serious issues such as poverty or drug problems. I believe your situations are real, your pain is real. I’m not here to ridicule or dismiss you. But as a person who came from heartland America, I also believe that there is another way than directing your anger at those who often have less power than you. Don’t let your discontent or your patriotism be exploited. Don’t look down, look up.” — EMA
EMA – the project of South Dakota native and Portland, OR-based artist Erika M. Anderson – has announced her third album Exile In The Outer Ring for release on August 25, 2017 via City Slang.

An early preview debuted online today in the form of searing, anthemic first single “Aryan Nation,” which can now be heard via a lyric video – created/produced/directed by Aaron Anderson & Eric Timothy Carlson, who recently worked with Bon Iver.

After the success of 2011’s Past Life Martyred Saints and 2014’s prophetic The Future’s Void, EMA retreated to a basement in Portland, Oregon – a generic apartment complex in a non-trendy neighborhood, with beige carpeting and cheap slat blinds. Now, she returns, with a portrait of The Outer Ring: A pitch-black world of dark night highways, American flags hung over basement windows, jails and revival meetings and casinos and rage. In a year dominated by white working-class alienation and anger, EMA – a Midwesterner who never lost her thousand-yard stare — has delivered an album that renders Middle American poverty and resentment with frightening realism and deep empathy.

In this first glimpse at the new record, “Aryan Nation“, feminist alienation becomes working-class alienation (“if you can’t see yourself in a “famous man,” is it because he’s a man, or because he’s famous?”) just as one person’s abuser becomes the systemic abuse of a nation. It’s an expansive vision that brings together concerns from every corner of our present moment — and themes that have recurred throughout EMA’s career, from the brutality of late capitalism to the collapsing boundaries between private and public — into one dark portrait of what it means to be American in 2017.

“I actually wrote this song about 3 years ago. It was partially inspired by people I’ve known in the the past and also the British film This Is England, which most people in the UK are familiar with but hardly any Americans have seen”Erika explains of her new single. “In the movie a group of non-racist UK skinheads in the 80s are radicalized through prison, poverty, and needless war. The results are violent and tragic. When I watched it I felt like I recognized a glimmer of their hopelessness and confusion in parts of America, but I had no clue how much that would explode in 2017.”

Exile In The Outer Ring, co-produced with Jacob Portrait of Unknown Mortal Orchestra, is a return to EMA’s roots in the noise-folk outfit Gowns, whose 2007 album Red State prefigured many of Exile’s core themes, along with its mix of stripped-back folk (“Always Bleeds,” originally a Gowns song), spoken word (“Where the Darkness Began”) and noise epics (“Breathalyzer”).

The album is unique in its mingling of gender politics with American working-class anxiety. The voices we hear in these songs — druggy, surly societal outcasts; Byronic nihilists bringing down fire — speak to a kind of rebellion that’s typically reserved for men, and the archetype of the “dirtbag teenage boy” dominates the album. Yet EMA claims some of that same dirtbag alienation for women — “a woman who swallowed a scumbag teen boy whole,” as EMA puts it – and uses it to interrogate both her own vulnerability and how male violence shapes the world.

The result is a deeply personal, confrontational, but ultimately redemptive album from a quintessentially American artist at the peak of her form.

Exile in the Outer Ring will be released on August 25th 2017 via City Slang.
Pre-order it here: https://emaband.lnk.to/aryannation

Exile in the Outer Ring artwork: