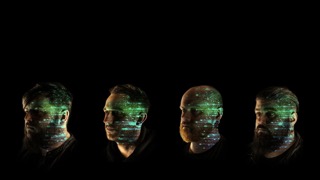 Glasgow post-rock outfit Dialects have been on the rise since the release of their debut EP ‘LTKLTL’, in 2015 which saw them praised highly by the likes of Prog Magazine, The Independent and Echoes and Dust while Kerrang described them as ‘delirious instrumental maestros’ .
Tours soon followed with Waking Aida, Luxembourg’s Mutiny on the Bounty and Icelandic giants Solstafir alongside slots at ArcTanGent Festival, Damnation Festival and Canadian Music week in Toronto.
With lots of plans being made the band recently announced a new double A-side single featuring two brand new tracks, ‘Illusory’ and ‘When You Die, You’re Truly Alone’.  Released on limited edition 7” vinyl via Sunbird Records on 28th April, ‘When You Die, You’re Truly Alone’ is the latest track Dialects have shared online.  Guitarist Conor Anderson comments:
The track was the first time I started experimenting with infinite reverb sounds, a sound that I use quite a lot in our live set to make our songs more cinematic. At the time I’d heard a few friends joke about 3 chord songs. I wanted us to do one but build on it with layers, using textures and sounds to develop the song. Ali came up with the inspirational idea of making his bass sound like an electronic drum kit. This allowed the track to space out more and complimented the drums. Following two separate lead melodies from Steve and I, the track closes with the bass and drums almost mimicking a heart monitor (something that ties into the story we’ve had going for these releases). It was a really nice change for us to do an all out ambient song’
https://soundcloud.com/dialectsuk/when-you-die-youre-truly-alone
Pre-order link – http://www.sunbirdrecords.co.uk/
facebook.com/DialectsUK
dialectsuk.bandcamp.com/release

Listen To KINDER’s New Single ‘Feeling Gets Too Heavy’

Matt and The Beanstalk single ‘Symphony’ is out now!