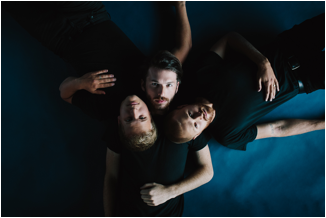 Third album due for release 12th May 2017 via Nevado Music

“Twitchily rhythmic, wan indie, with some pretensions towards epic, ringing guitars, and vocals that express rapture and longing, often at once” –

“Lush atmosphere with dream-like guitars and melodies with some pretty huge choruses as well.” – The 405

Every body knows a ‘close talker’ in life, right? Not just because of the infamous Seinfeld episode, but maybe a work colleague, a family member or a drinking buddy; there’s always one that gets too close for comfort. Close Talker the band, are now a three-piece alternative indie rock band from the western Canadian province ofSaskatchewan with members Will Quiring (Vox), Matt Kopperud (Guitar) and Chris Morien (Drums) making up the numbers.

Close Talker as a band name isn’t necessarily a statement to all you ‘close talkers’ out there, or to indirectly communicate the message to Matt’s local butcher, who along with his lazy eye makes for a very uncomfortable conversationalist. It’s a name the guys thought was sticky and memorable, and it’s proved to be just that. And for the record, Matt has no plans of becoming vegetarian any time soon.

Originally a four-piece, Close Talker’s last 18 months touring have been spent with just the three members mentioned since losing their bassist in 2015. This presented difficult challenges to deliver the material from the bands sophomore record, 2014’s Flux, in a live environment. Never a band to be put off by a music challenge, the guys responded and doubled the workload of each limb. Will took on a synth, Chris a drum pad and Matt, perhaps most impressively of all, organ pedals for humble bass lines, ensuring the show went on. Matt states ‘Although we’re only three people now, the live show always has at least nine limbs working full time to accurately portray the record live.’ In a musical landscape of electronic music and death-by-sampling, it’s a very fitting response to losing a founding member, an often band-breaking situation. ‘We’re not a ‘hit space bar’ band or sample driven band and hope to never become one as we truly love playing our instruments.’

Described as ‘rigid yet sanguine… with achingly euphoric lyricism’ (SPIN), and ‘wistful, intricate guitar pop’ (Q Magazine), Flux helped to place the band on the international scene, garnering great support from both sides of the pond and giving the band the capacity to tour extensively across Canada, USA and European territories on a number of different occasions.

The bands latest effort and third studio album Lens is a continuation of the minimalistic song writing and spacious production and of it’s forefathers. Bass hasn’t become an issue either: ‘Musically speaking Close Talker has now evolved sonically and the irony is that we’re more dynamic and perhaps bassier than ever.’ Building upon the foundations of Flux, Close Talker incorporate more layers (and limbs) then ever to create a record that demonstrates the progress and increasing musical understanding of the group.

Opening up with the synth stabs, seamless bass groove of All of Us, the tone is set for the record, with subtle guitar playing complimenting the ever-impressive creativity in the rhythmic section. Close Talker have draw comparisons to Local Natives, Bombay Bicycle Club and Deerhunter in the past, and although Lens fits the demographic of these big hitters, the originality of this ever-developing band is never in question.

Okay Hollywood is self-admittedly ‘a sarcastic anthem poking fun at people’s tendencies (ourselves included) to take themselves and their own agenda’s too seriously’. Everyone has his or her own disposition and subconscious strategy to gain self worth. ‘We think the most common mistake is imposing the importance of yourself and your victories onto others.’ In a world of ‘one uppers’ and ‘people pleasers’, where the loudest opinions get the most headlines, this standout track is a light hearted reality-check, a sober reminder to be grounded and above all else, remain authentic.

Reptiles leads the line as a standout single with its upbeat, and aggressive panache, whilst on the flip side; closing track Seasonal Friends is a melodic jab at part-time friendships (‘Seasonal friends, it’s nothing new’) representing the bands impressive lyricism recognised above by SPIN. Since the guys began composing together, the aim has been to create a distinguishable character in their music, to never have one album to sound like another. Lens is a forward-thinking example of this philosophy.

‘I think collectively we all are inspired by the constant and endless pursuit that is music. It can easily become daunting at times, but knowing that we’ll never truly arrive musically and we’ll always be chasing the next idea or song is something that if you allow it, can be really inspiring.’

Lens will be available in all the usual places Friday 12th May 2017 via Nevado Music. Close Talker will play The Sebright Arms in London shortly after with more European tour dates to follow soon.