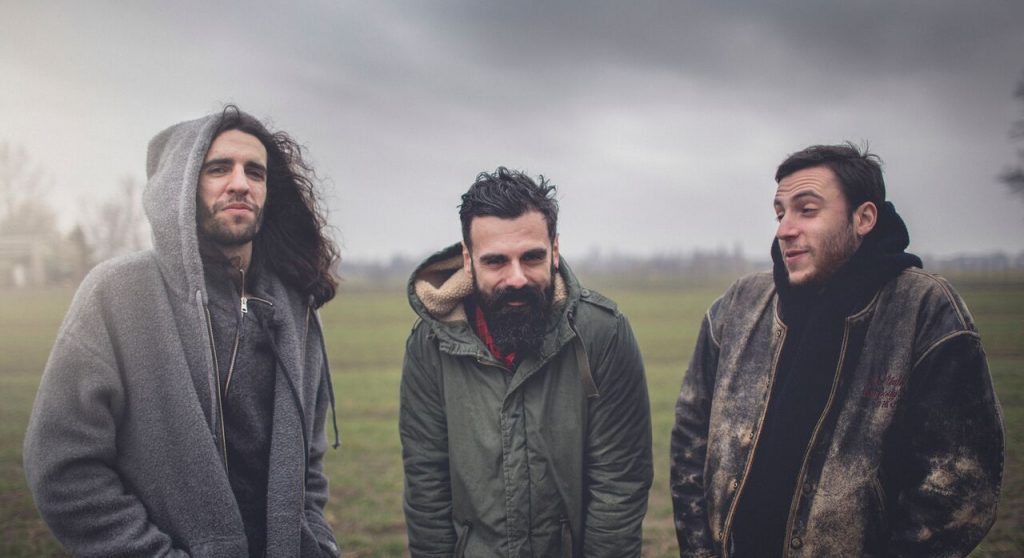 VALERIAN SWING ANNOUNCE NEW ALBUM ‘NIGHTS’ – SHARE NEW TRACK & TOUR DATES
Initially emerging in 2011, Valerian Swing cemented their place as one of most interesting bands in the Italian heavy scene,with their second album “A Sailor Lost Around The Earth”, and then at an international level with 2014’s ‘Aurora’.
Now 2017 sees the return of Valerian Swing following a change of personnel. One that saw the exit of bassist Alan Ferioli in favour of baritone guitarist Francesco Giovanetti. The trio went and created their fourth full length album, during a period of personnel, artistic growth and maturity that has seen them gradually expand their spectrum of sound beyond the boundaries of just being ‘heavy’. This latest chapter has resulted in new album ‘ Nights’ that is undoubtedly their most accessible, rich and varied record to date. ‘Four Horses’ is the first track to be shared from the record.  Guitarist Stefano Villani comments; ‘It was the first piece composed after ‘AURORA’ no voices, rhythmic twists killer, and the most rousing refrain that we’ve ever done. Hearing is believing.’
Composed last summer over a relatively short time period (by their standards) and recorded at the turn of 2016 in Bologna and Reggio Emilia, ’Night’s saw the band work with long time friend and sound engineer Raffaele Marchetti. Mixing of was handled by Matt Bayles (Mastodon, Isis, Botch, Russian Circles, Caspian) at Red Room Recording in Seattle.
‘Nights’ is a record that showcases Valerian Swing’s sublime technique and speed but unlike previous albums the aim was to focus more on the melodic construction of their songs and less on the extreme. The result is an an album that explores more expansive post-rock, rhythmic and cinematic sounds.
At certain points throughout ‘Nights’ especially with the added vocal elements, some tracks verge into experimental pop territory,  an area the band were unafraid to visit. The influence of new baritone guitarist F. Giovanetti ( and synths) on Valerian Swing is evident. His place in the band allowed guitarist/vocalist Stefano Villani to lead them in a more free way allowing for experimentation with computers, electronics, processed vocals and devices different from the guitar.
Having played all over the world, including the SXSW, and having shared stages with bands of the caliber of Russian Circles, Boris and This Town Needs Guns, Valerian Swing will bring their eclectic ’Nights’ in concert, first in Europe from the end of April – including a slot at Colossal Weekend in Copenhagen with Deafheaven, Oxbox and many others.
’Nights’ will be released in via Small Pond on 12th May with To Lose La Track handling the release in Italy.
The band are set to tour the UK in April with Alpha Male Tea Party:
26th April – Bristol, Stage & Hounds
27th April – Manchester, Aatma
28th April – London, Birthdays
29th April – Brighton, Green Door Store
Followed by their own European shows in May:
2nd May – Antwerp, Antwerp Music City
3rd May – Metz, La Chaouée
4th May – Bremen, Zollkantine
5th May – Kiel, Medusa
6th May – Copenhagen, A Colossal Weekend/Vega
Valerian Swing are:
Stefano Villani: guitars, electronics, vocals
David Ferretti: drums
Francesco Giovanetti: baritone guitar, synths
facebook.com/valerianswingmusic/
http://smallpondrec.co.uk/