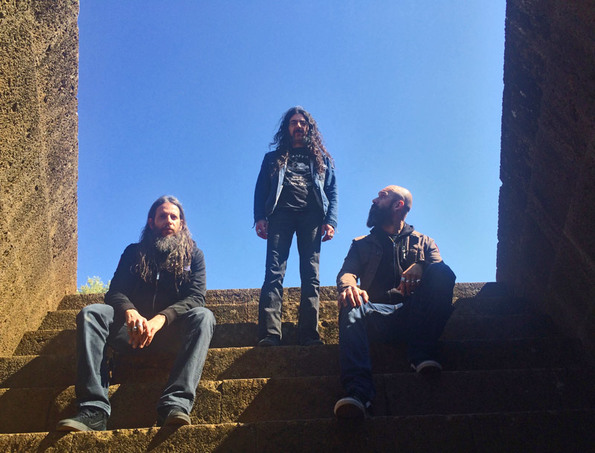 UFOMAMMUT ANNOUNCE NEW ALBUM “8” INCOMING SEPTEMBER 22ND VIA NEUROT;  PLUS LIVE DATES ANNOUNCED
Speak to any purveyor of the darkened heavy sonic and they’ll recommend Ufomammut. Masters of melding uncompromisingly heavy magic with psychedelic swirls, it is now with the heaviest and most immense pleasure to announce that the Italian alchemic juggernaut will be offering a new album this September 22nd (Neurot Recordings) consisting of eight darkened gems, aptly titled 8 .
Sonically and symbolically, 8 is not only wickedly limitless in its heaviness, powerfulness and commanding nature, but how it arrests the listener’s mind creating a wholly unbounded and impenetrable sensory experience. Laden with symbolic nuances, 8 most obviously gestures towards this being Ufomammut’s 8th offering, comprised of 8 stunningly immersive tracks that flow into each other without interruption. This flow can also be seen when you tip 8 horizontally, thus it morphs into the leniscate from algebraic geometry –  ∞ – a plane curve that meets at central point – or more commonly known as the infinity symbol. A continuous stream of movement reflective of the uninterrupted nature of the album but also the continued togetherness of the essential elements of the band – Urlo, Poia and Vita – since the beginning of the band’s history.  ∞ tipped vertically sees us return to the number 8. It must be stressed there is no singular pronunciation of the title, 8 is to be spoken in every language e.g. “eight” in English, “otto” in Italian, “acht” in German and so on.
As stated, 8 is a continuous flux of music, a singular entity, which can be defined in micro measurements by its eight satellite songs. Each track expands upon the preceding song, unfolding into an exceedingly dense, malevolent and formidable journey, resulting in this being Ufomammut’s most extreme venture yet, with no permittance for breathing space in the 48 minutes. The album’s predecessor Ecate has now been put to rest and we can be assured that 8 is an essential turning point in the infinity that is Ufommamut’s sonic.
VIDEO OF RECORDING SESSION
Recorded at Crono Sound Factory in Vimodrone, Milano (IT),  8  is a major turning point in the heavy alchemic arts, with the elements of Ufomammut’s recording constellation being re-aligned. Although the musicians within Ufomammut’s collective remain unturned, a change in recording approach saw the trio playing and recording live together in the same room, even utilising their live sound engineer Ciccio and his project FEMORE for production purposes, with Fabrizio San Pietro on mixing duties. Overdubs were used only for vocals, synth sounds and small details with the result of such endeavour being a stricter focus on the soul, darkened groove and overall cohesion of the music and themselves as musicians. In turn, 8 clarified to Ufomammut who they are as a unit now and their new sonic path…
8 is due for release on September 22nd on vinyl and CD formats via Neurot Recordings and on a limited and regular edition vinyl via Supernatural Cat. Pre order information, album tracks and more to be revealed over the coming months.
In anticipation of Ufomammut’s 8 you can catch the conjurers of heavy mind swirls at the following:
UFOMAMMUT LIVE DATES
16/06 – Freak Valley Fest (Netphen, DE)
18/06 – Hellfest (Clisson, FR)
04/08 – Disintegrate Your Ignorance Fest (Giavera del Montello, IT)
06/10 – Up in Smoke Fest (Pratteln, CH)
13/10 – Korjaamo BlowUp Vol.3 Festival (Helsinki, FI)
www.ufomammut.com