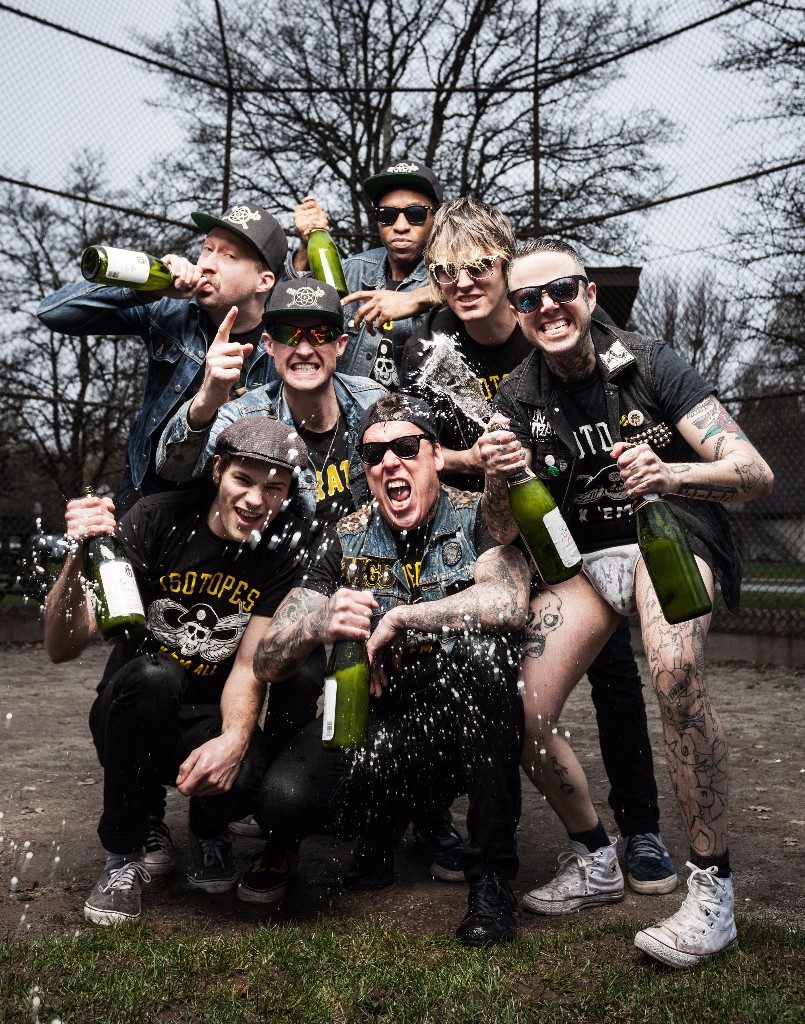 The Isotopes go full-blown Wayne’s World in their new video for “Legend Of George Brett” as they pay homage to Baseball-Hall-Of-Famer, George Brett, and the infamous Las Vegas poop-his-pants incident. It ain’t a party ’til your pants have been destroyed! Party on!

‘1994 World Series Champions’ is 10 crushing baseball punk anthems that showcase the Isotopes’ vast baseball acumen and sharp clubhouse wit. Throughout the record, the band makes reference to many classic moments such as Hall Of Famer George Brett pooping his pants in the lobby of the Bellagio in Las Vegas, Jose Canseco blowing his own finger off while cleaning his pistol, and the time George Constanza steamrolled Bette Midler at home plate, sending her to the hospital.

The new album sees the Isotopes link up with Destiny Records in the UK and Europe, along with long-term teammates, Stomp Records in Canada/US.

Speaking on the new partnership, Jacho, label manager of Destiny Records said, “I’m super excited to have the Isotopes join us on Destiny Records. The new album is fantastic – In fact, it’s the best Ramones-esque punk rock experience I’ve had in the last 10 years! Perfect songs and huge amounts of fun.”

Frontman, Evan October followed up with, “We never knew Europe was such a huge baseball punk town. Turns out we feel right at home over there. It’s a real honour to join an organization like Destiny Records and we just wanna go out there and play hard every night and hopefully have another big season.”

The band are set to tour Mainland Europe extensively this Spring, commencing on 30.03.17, with dates throughout Germany, Switzerland, Spain, France, Italy and the Netherlands.

With releases on Stomp Records, Red Scare Industries and Shake! Records previously, the Isotopes have pioneered the baseball punk movement, and cultivated a faithful legion of baseball punx worldwide with their gritty, no-bargain brand of juice-injected buzz-saw pop punk.

Truly operating like a punk rock all-star team, the Isotopes have seen over 40 players come through their ranks, including members of the Real McKenzies, Exploding F**k Dolls, Vibrators, DOA, Nervous Talk, and Dee Cracks, none of whom have played every show.

The club’s show-must-go-on ethos was famously put to action during a 2013 US tour, when singer, Evan October was detained at the US border and refused entry to the United States. Acting quickly, the ‘topes reshuffled the line-up and guitarist Dallas Duststorm stepped in on lead vocals.

Subsequently, October and Duststorm were slapped with 5-year bans from entering the USA – but instead of hitting the showers, the club took a season to rebuild, and focus on dominating their home turf in Canada. Buoyed back into contention by signing to Stomp Records, the original bad boys of summer released their critically acclaimed, debut LP, Nuclear Strikezone, which features  – amidst a barrage of hits – a cameo appearance by hall-of-fame ringer, Blag Dahlia of the Dwarves.

For those keeping score at home, the ‘Topes have shared the stage with some of the stiffest competition in the game such as: CJ Ramone, Pennywise, Off With Their Heads, ToyGuitar, Face To Face, The Real McKenzies, The Queers, Hanson Brothers, Zeroes, The Methadones, Teenage Bottlerocket, Chixdiggit, Swingin’ Utters, Gob, Agent Orange, Richie Ramone. 9/10 opponents agree  – the ‘Topes are a force to be feared.