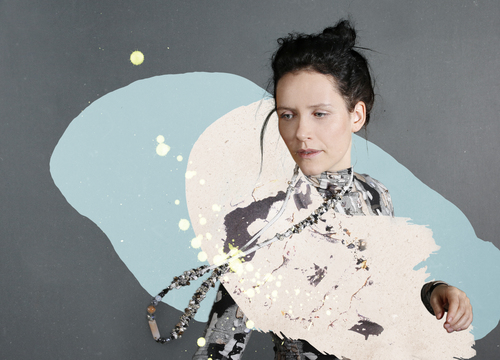 Sóley
Shares new video for “Grow”
Taken from her forthcoming album Endless Summer
Out on 19 May via Morr Music
Icelandic artist Sóley shared the video for the track “Grow”, taken from her forthcoming album Endless Summer, due out on Morr Music on 19 May. The video, premiered by The 405, is set amid a particularly heavy snowfall in Reykjavik. As director Samantha Shay explains: “On the day of our shoot, a record snowfall hit Reykjavik, and we thought, how could we possibly make a video for an album called “Endless Summer”, but I realised through this process that Sóley is the Endless Summer, conjuring her incandescence. So there she is, in the middle of the snow all on her own, dreaming of the warmth she creates to surround her. This ability to be present with what is in front of us, instead of what we wish could be, is to me, the journey of the song, and Sóley’s journey that I tried to capture in Grow.”

Sóley’s third album, Endless Summer is like the Icelandic summer, a liminal, endless turning and shifting of days, with seemlingly endless brightness embued with just a hint of winter. Her entrancing and unsettling piano playing are counterbalanced by lilting vocals and complimented by arrangements for a small orchestra. Unexpected chord progressions transform into the most decadently inviting pop songs.

More info about the video and the director:

Samantha Shay is a  director of theatre and film, performer, and producer.  She is the founder of internationally recognised artist collective Source Material, and frequently collaborates with musicians, including JFDR (Jófríður Akadóttir), K A R Y Y N, Jodie Landau, Johanna Warren, and Sóley (Sóley Stefánsdóttir). 2016 marks an initiatory time in her young career. In July she premiered her performance of Light, which garnered the attention of world renowned artists such as performance artist Marina Abramovic, whom mentored Shay through the creation of the work, and Björk, who listed her as one of her artistic inspirations in The Guardian after attending the premier. And if 2016 was not exciting enough for Samantha, she headed to Poland to premier A Thousand Tongues, a collaborative piece by Nini Julia Bang, which premiered in the world renowned Theatre Olympics as part of the European Capital of Culture 2016, a co-production between Source Material, and the Grotowski Institute. Now she is beginning new work.  Samantha holds a BFA in Acting from the California Institute of the Arts. For more information, visit www.samantha-shay.com and www.source-materia.us.

Samantha Shay talks about the video:

I met Sóley the first time I came to Iceland, and at this time, she hadn’t released any of her solo material. Over the last seven years we’ve watched each other grow artistically and personally, and when she told me about Endless Summer and asked me to make a video, she explained that she wanted to jump outside of her own artistic habits. I really took that and ran with it, and I honestly didn’t realise until now, how much she allowed me to push her out of her comfort zone until the completion of the video.

I chose to make something very personal, and she really let me. We decided Sóley would not wear glasses, that she would sing directly into the camera, that her face would not be manipulated in any way in the editing room. The text you see that bookends the video is taken from personal emails she sent me about the album. We entered a special, kind of meditative sacred space together, where she knew I could see her, and she let it be there.  I was reminded that the best directors just fall in love with people, and with everything about them, especially their intricacies, their fears, their blocks, because those places are actually the entry point into something unprecedented, in other words, the entry point to the artistic process.  In some ways, this feels more like a portrait of Sóley.

Written over the period of a year together with her long-time friend and collaborator Albert Finnbogason, Endless Summer by Sóley sees the acclaimed Icelandic musician explore the more optimistic, sun-drenched corners of her songwriting. The new LP is the warmth beneath the snow at the end of winter, the seeds waiting to grow as spring whispers through. Following the heavy organs, synths, and minor keys of her last album Ask The Deep, Endless Summer emerges with a hopeful sweetness and feels even more vulnerable.

“The idea for the album came pretty randomly one night in beginning of January 2016 when I woke up in the middle of the night and wrote a note to myself: ‘Write about hope and spring’,” she says about the LP’s general direction. “So I painted my studio in yellow and purple, bought a grand piano, sat down and started playing, singing and writing.”

Endless Summer delivers just that, opening with the song “Úa” (named after her young daughter) that washes over us like a hopeful dream. It’s based on  adventurous acoustic arrangements reminiscent of Joanna Newsom or Agnes Obel, which sets the tone for what is to follow in its wake. Throughout the new album, Sóley’s arrangements for a small orchestra give Endless Summer a colourful touch: Take, for example, the track “Never Cry Moon,” in which the sound of clarinet, trombone and cello beautifully engulf Sóley’s piano playing.

Comprised of eight songs, Endless Summer is grounded in fertile wisdom. Not just an ethereal dream of love and light, but a subtle, accumulative wisdom, a conscious choice to cling to vitality. Full of childlike wonder yet retaining a form of reverence, the album sees Sóley stepping out of a lingering nightmare to become an enchanted lover of mystery.