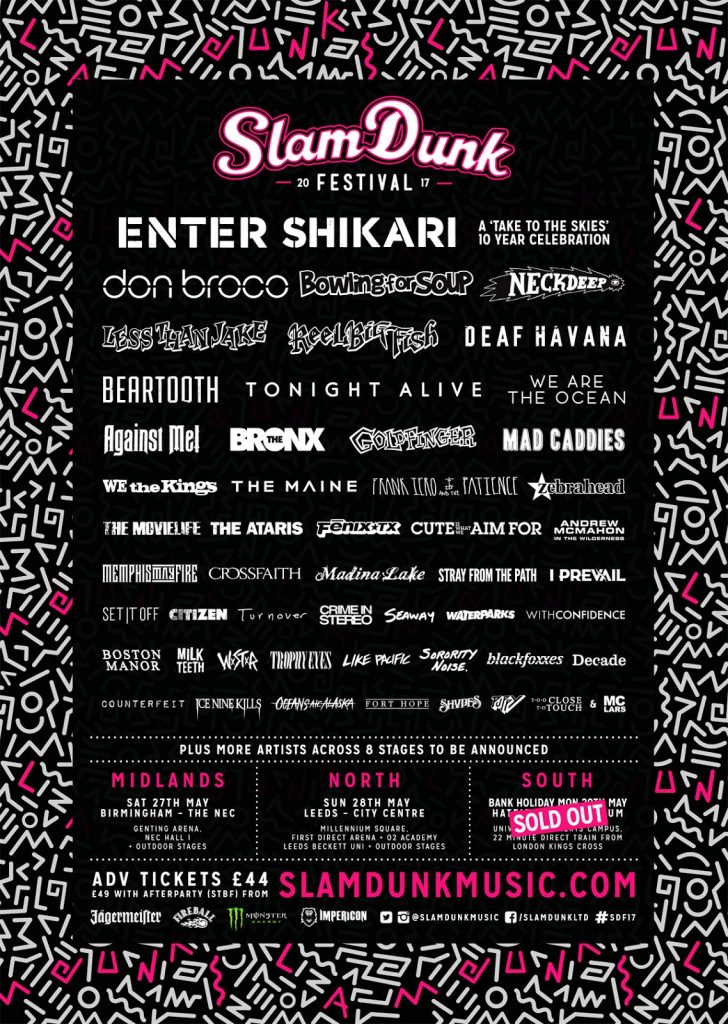 CROSSFAITH, WITH CONFIDENCE, WATERPARKS, DECADE, COUNTERFEIT, MILK TEETH, ANDREW MCMAHON IN THE WILDERNESS, BLACK FOXXES, FORT HOPE, SHVPES AND PUPPY ARE ADDED TO SLAM DUNK FESTIVAL 2017
JOINING HEADLINERS ENTER SHIKARI PLUS BEARTOOTH, NECK DEEP, TONIGHT ALIVE, DON BROCO, AGAINST ME! AND MANY MORE ACROSS THE FESTIVAL
MORE ACTS AND 7 MORE STAGE SPLITS STILL TO BE REVEALED
**SLAM DUNK FESTIVAL SOUTH – SOLD OUT**
SLAM DUNK FESTIVAL MIDLANDS – SATURDAY 27TH MAY – BIRMINGHAM, NEC
SLAM DUNK FESTIVAL NORTH – SUNDAY 28TH MAY – LEEDS, CITY CENTRE
SLAM DUNK FESTIVAL SOUTH – BANK HOLIDAY MONDAY 29TH MAY – HATFIELD, THE FORUM
http://slamdunkmusic.com/festival
Slam Dunk Festival 2017 has announced even more incredible acts for this year’s pop-punk extravaganza. Japanese electronic masters Crossfaith, Australian youngbloods With Confidence and the slick pop-punk trio Waterparks will appear alongside Decade, Counterfeit, Milk Teeth, Andrew McMahon In The Wilderness, Black Foxxes, Fort Hope, SHVPES and Puppy over the May Bank Holiday weekend.
In addition to these amazing names, Slam Dunk Festival is pleased to announce that the south site, taking place at Hatfield, The Forum has sold out in record time! Both standard tickets and afterparty tickets for Birmingham and Leeds are still available but festival fans are urged to buy their tickets from official ticket agents as soon as possible to avoid disappointment.
Known for their relentless touring, Crossfaith are recognised worldwide for their frenzied fusion of heavy metal and blistering electronica. Set to slam through well-known heavy hits such as ‘Monolith’, ‘Rx Overdrive’ and party-starting ‘Jågerbomb’, Japan’s hottest electro import is raring to go for this year’s shindig.
On their return to the festival, Crossfaith says; “We love playing Slam Dunk, and 2017 is going to be Crossfaith’s best performance at the festival ever! The New Age Warriors are coming to get you, and we can’t wait to see all of our fans in the UK. Let’s go!”
Energetic aussie quartet With Confidence and hotly-tipped Texan trio Waterparks both made their debut at last year’s Slam Dunk Festival – and are set to rip things up again this year.
On the Brit-punk front, this year the festival has enrolled a myriad of homegrown stars for the line up, including the untameable mob Milk Teeth,London boys Counterfeit and catchy-as-hell quintet Decade, who appear off the back of their recently released infectious sophomore album ‘Pleasantries’.
Speaking about the announcement, Counterfeit says;“We are SO stoked to be playing at Slam Dunk this year! Some of our favourite artists are playing and its gonna be great to get out there alongside them.”
Known for his expert musicianship in Something Corporate and Jack’s Mannequin, Andrew McMahon returns to Slam Dunk Festival, this time as Andrew McMahon in The Wilderness, to share his latest musical offering.
Storming onto the scene with debut album ‘I’m Not Well’, Exeter-hailing three piece Black Foxxes mix killer riffs and hypnotic choruses, creating sophisticated anthems that usually take a lifetime to perfect, and will be enjoyed en masse at Slam Dunk Festival’s three locations.
On making their Slam Dunk Festival debut, Black Foxxes’ Mark Holley says;“We’ve been going to Slam Dunk as a fan for years, I remember as a kid always imagining playing it. It’s rad that we have finally got the chance to do just that.”
Returning to the festival after memorable performances in 2015 are Hertfordshire’s Fort Hope, Birmingham’s SHVPES and London’s Puppy. With SHVPES descending from rock royalty, Fort Hope recently hinting on Twitter that they’ve got some big things in the pipeline and Puppy hotly tipped to conquer 2017, May is set to be explosive.
Gearing up for their return, SHVPES’ Griff Dickinson says;“We played Slam Dunk two years ago & it was such a defining moment for our band. To be asked back & have the ability to add this next milestone is an absolute pleasure. We can’t fuckin’ wait! See you in May!!”
Offering an unparalleled display of pop-punk movers and shakers across 8 stages, Slam Dunk Festival is set to celebrate all things alternative as it welcomes incredible one-off anniversary performances from blistering headliners Enter Shikari, debut albums in full with American pop-rockers Cute Is What We Aim For and We The Kings, a special reunion performance from Madina Lake and the final-ever shows from We Are The Ocean. Whether you’re at Birmingham on May 27th, Leeds on May 28th or Hatfield on May 29th, Slam Dunk Festival 2017 will be the ultimate alternative party of the summer.
FULL LINE-UP TO DATE Enter Shikari, Don Broco, Bowling For Soup, Neck Deep, Less Than Jake, Reel Big Fish, Deaf Havana, Beartooth, Tonight Alive, We Are The Ocean, Crossfaith, Against Me!, The Bronx, With Confidence, Goldfinger, Mad Caddies, Waterparks, The Movielife, Frank Iero & The Patience, Decade, Zebrahead, Counterfeit, We The Kings, The Ataris, Fenix TX, Milk Teeth, The Maine, Cute Is What We Aim For, Memphis May Fire, Andrew McMahon In The Wilderness, Madina Lake, Set It Off, Citizen, Black Foxxes, Turnover, Crime In Stereo, Seaway, Fort Hope, SHVPES, Trophy Eyes, Boston Manor, WSTR, Like Pacific, Puppy, Sorority Noise, Stray From The Path, I Prevail, Ice Nine Kills, Oceans Ate Alaska, Too Close To Touch, MC Lars.
TICKET INFORMATIONAdvance tickets £44 or £49 with after party are on sale now. www.slamdunkmusic.com
Facebook – https://www.facebook.com/slamdunkltd/
Twitter – @slamdunkmusic
Instagram – @slamdunkmusic 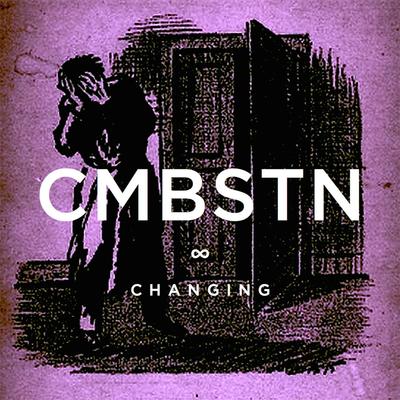