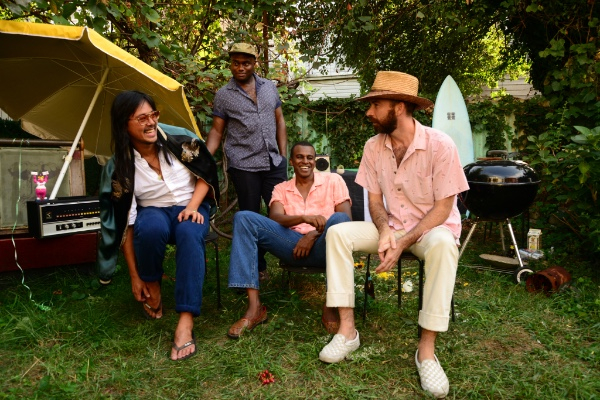 “A compelling reminder of the uplifting power of music” – **** The Observer
“Sinkane has nowhere near the fame he deserves; may this be the album that gives you life” – **** The Guardian
“The way Sinkane […] puts positive messages against a vibrant blend of soul, funk and Afrobeat is inspiring indeed” – **** The Times
“A powerful reminder that basic truths, basic rights, are always the most important.” – 8/10, Clash
“Nine tracks that celebrate the type of warmth and spirit that we could all do with a little more of.” – Drowned In Sound
“2017’s Best Music” – NPR
“The best Sinkane album… a breezy thrill” – Stereogum, ‘Album of the Week’
“The highlife bluster and catchy hooks of ‘Life & Livin’ It’ are sweet as taffy, like a bright sunburst of positivity that could melt ice.” – Pitchfork

With a UK tour set to start next week, taking in sold out shows in Leeds, Manchester and London, SINKANE has confirmed more September live dates.

Including a headline show at London’s Heaven, and in addition to previously announced performances at Field Day, Primavera & End of the Road festivals, these dates continue a year that has already seen Ahmed Gallaband his band make their mark.

Sinkane’s new album, ‘Life & Livin’ It’ came out in February on City Slang, it’s message of strength & positivity in dark times feeling especially poignant for many. This is feel-good music for trying times, celebrating what makes life good without ignoring what makes it hard – and album full of slinky funk and soul grooves with sparkling melodies rooted in sub-Saharan Africa.

Having spent much of the last few years as the core musicians for The Atomic Bomb Band — the highly celebrated 15-piece outfit that played the music of the late Nigerian electro-funk maestro William Onyeabor –Sinkane’s live shows are unparalleled.

An ever-evolving jam-band, Ahmed Gallab is joined both on this new record and on stage, by Ish Montgomery (bass), Jason Trammell (drums), Jonny Lam (guitar) and now Amanda Khiri (vocals) and Elenna Canlas (keys and vocals).

They invite you to the Sinkane party at the following European shows: