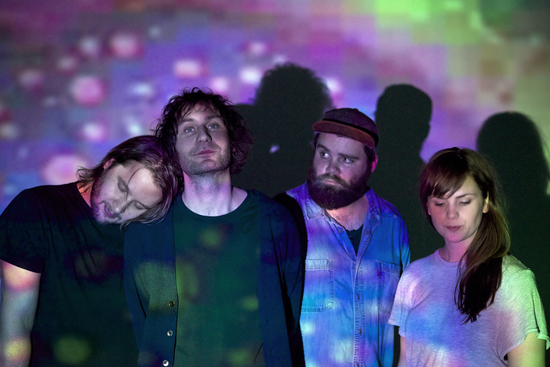 The Megaphonic Thrift Premieres
“Bergen Revels” with NPR Music
Album Sun Stare Sound out in the US
on 4/7 via Old Flame
Norwegian four-piece The Megaphonic Thrift premiered “Bergen Revels” at NPR Music, with Lars Gotrich saying “It’s a noise-pop record that puts the emphasis on pop, bursting with earworm-y melodies sunk into lysergic effects, guitar and bass interlaced like latticework with dreamy, dueling vocals.” The track is off their album Sun Stare Sound, which won the band a Spellemann Award (equivelant of a Norwegian Grammy Award) for Best Indie Album. Sun Stare Sound will finally be released in the US on April 7th via Old Flame Records.
Listen to the track at NPR Music:
http://n.pr/2nMNatk
The Megaphonic Thrift is composed of four Norwegians from Bergen, a rainy scenic city on the west coast of Norway. Joining forces with the collective desire to create a new sonic adventure, Richard Myklebust, Linn Frøkedal (The Low Frequency in Stereo), Fredrik Vogsborg (Casiokids) and Njål Clementsen (The Low Frequency in Stereo) created The Megaphonic Thrift.
This past November, the band released their album Få meg til verden i tide, which was praised by SPIN as “pulverizing noise rock.” The Line of Best Fit said that the album “joins the dots between Beach House and Real Estate, but sounds fresh simply because it’s a side to the band we’ve not heard before”
The band has performed at at SXSW, CMJ, The Great Escape, PopKomm and Roskilde, as well as several support shows for Dinousaur Jr, Stephen Malkmus and the Jicks, Band of Horses and A Place to Bury Strangers.
www.themegaphonicthrift.com
www.facebook.com/themegaphonicthrift
www.twitter.com/MegaphonicThrft