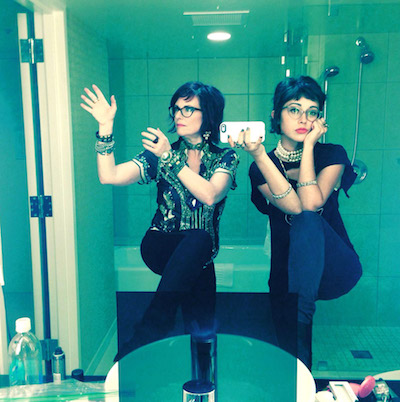 Megan Mullally, the two-time Emmy Award winning US star of TV’s ‘Will & Grace’, returns to the UK for her first concert appearance in over seven years with her new partner-in-crime Stephanie Hunt and their band, Nancy And Beth. Megan and Stephanie play London’s Royal Festival Hall on Thursday 20th April followed by Manchester’s Palace Theatre on Saturday 22nd April.  After touring the U.S. and taking a break to record their eponymous album, Nancy And Beth are back with a new all-singing, all-dancing throw-down of a show that will blow your entertainment quota to smithereens.

Although best known for playing the much-loved role of Karen Walker in ‘Will & Grace’, Megan is an exceptionally experienced singer, having starred in Broadway productions of ‘Grease’, ‘How to Succeed in Business Without Really Trying’ and the Mel Brooks musical, ‘Young Frankenstein’.  Having made her West End concert debut in 2010 with her previous band, Supreme Music Program – with whom she also recorded three albums and played prestigious venues across America – Megan and bandmate Stephanie are delighted to finally bring Nancy And Beth’s humour and music to the UK.

Emmy Award-winning actress and musician Megan Mullally has appeared on Broadway in revivals of ‘Grease’, ‘How To Succeed’ (opposite Matthew Broderick), and Mel Brook’s ‘Young Frankenstein’. Recently, Megan appeared in Terrence McNally’s smash Broadway hit ‘It’s Only A Play’, and played the role of Adelaide opposite Nathan Lane in Carnegie Hall’s celebrated ‘Guys and Dolls’ revival. Television includes 7 seasons of the Emmy Award-winning ‘Children’s Hospital’, ‘Parks and Recreation’ (as the evil Tammy II), Lydia on acclaimed cult favorite ‘Party Down’, Aunt Gayle on Fox’s animated ‘Bob’s Burgers’, and Karen Walker on NBC’s hit sitcom Will & Grace, for which she received two Emmys, four Screen Actors Guild awards and four Golden Globe nominations. In film, Megan stars opposite Bryan Cranston and James Franco in the new hit comedy ‘Why Him?’, and will appear in four other movies in 2017: ‘Oh Lucy!’, ‘LEMON’, ‘The Masterpiece’, and ‘Infinity Baby’.  Megan and her husband Nick Offerman have toured the US and UK with their comedy show Summer of ‘69: No Apostrophe’, airing on Epix May 19. Megan will return to television in the fall as Karen on NBC’s reboot of Will & Grace.

Stephanie Hunt is a musician, songwriter, actress and writer from Austin, Texas.  She’s a founding member of The Ghost Songs with Alex Maas and Christian Bland, members of The Black Angels.  She’s appeared on ‘Friday Night Lights‘ (NBC), ‘Californication’ (Showtime), ‘Glee’ (Fox), in the films ‘Somebody Up There Likes Me’ and ‘Poorboy’, and was a regular on ‘How To Live With Your Parents For The Rest of Your Life’ (ABC), and ‘Your Family or Mine’ (TBS).   Check her out in the ‘Funny or Die Staff Pick’, Dalai Lama.

The pair have just unveiled a new video-

’Please Mr. Jailer’ ended up being a song that we would do a lot as an opener in our live shows,” explains Mullally about the song. Talking about their live shows, described as punk showbiz, Mullaly said “i think we’re getting ready to do a number with a hat and cane, that kind of thing, we already do a couple numbers with chairs – chairs being a classic, Bob Fosse-ish, showbizzy prop, but the punk element is that it’s just me and Stephanie and this funky band from Austin.”