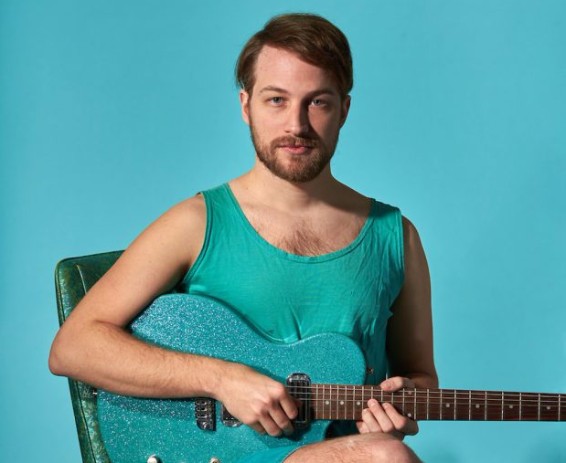 Due Out April 28th via Mutual Crush / Endless Daze

“Laser Background succeeds here by putting sweet and sour in a room together and forcing them to get along. Molholt’s boyish vocals and the sing-song melody go head-to-head with queasy, warbling guitar and drums, creating tension that steadily builds into a full-on panic attack. Lyrically, the track deals with feelings of inadequacy, as the repeated intonement of “No one has to know” grows in intensity with the instrumental. This sense of anxiety is just as apparent in the song’s accompanying visual.”

Dark Nuclear Bogs is meant to be a psychedelic adventure LP. Speaking about the album, Molholt shared, “with Laser Background in general, I like to push/pull the listener back & forth across the line of comfort. I like to lull people into a sense of stability, shake them out of it, and then pull them back into it again.”

Laser Background will spend the Spring out on tour around the US including dates with Sad13, Operator Music Band, Norwegian Arms, and more. All dates can be found below.

For the better part of the past decade, Andy Molholt has been creating music as Laser Background. With each release, Molholt has come closer and closer to a unified vision, a musical explanation of how he sees the world. With his new LP, he has come closer than ever before, and titled the result Dark Nuclear Bogs. Originally conceptualized while thinking up anagrams of Laser Background in order to play a secret show, Dark Nuclear Bogs is the classic ‘self-titled LP as mission statement’ flipped on its head, seen from the unique, kaleidoscopic perspective that Laser Background is known for.

Dark Nuclear Bogs was recorded in a friend’s house on a man-made reservoir north of Atlanta with Carlos Hernandez and Julian Fader of Ava Luna. The houses’ décor, unchanged since the previous tenant left in the 1970s, provided a perfect environment for the trio to cut the songs live to tape, and the relative seclusion of the lake allowed them to record whenever inspiration struck. As a result, different songs feel attached to different times of day. The opening track “Mostly Water” (written during a period of self-induced sleep deprivation) sounds like an unwelcome, hung-over morning where wanderlust overtakes common sense, and the raucous “Slubberdeguillion” (which takes its name from an Olde English word meaning ‘worthless person’) acts as the sloppy, self-destructive all-nighter that precedes it. In this song, Molholt pitches his vocals up two octaves and wonders out loud. “Why even bother to take a shower if you’re going to get dirty?”

Formed after the demise of Molholt’s band The Armchairs, Laser Background began as an attempt to put the stranger, more psychedelic aspects of childhood into music, and as an exploration of what effects childhood has on the rest of human life. 2012’s Laser Background EP and 2013’s Super Future Montage delved into these ideas, and even as the childlike aspects of the band drifted away on 2016’s Correct, the big questions remained. Questions we ask ourselves when we are young, and never quite find the answers to. Questions like “How does one deal with trauma?” and “How does one know when to let someone go?” Dark Nuclear Bogs feels like the logical conclusion to the ideas on which Laser Background has based its foundation.