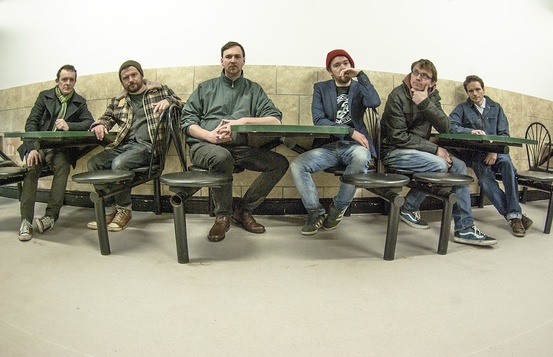 Flourishing where sparks fly between primal rock brawn and artrock grace, Hey Colossus have undergone a spectacular metamorphosis in the last three years. Previously famed for their unflinchingly abject and pulverising noiserock assaults, the 2015 Rocket Recordings double-drop of In Black And Gold and Radio Static High displayed not only a band with a work rate to put most all their contemporaries to shame, but one arriving at an atmospheric and rewarding sound with as much flair for the beguiling as the barbaric – within these grooves were everything from Amphetamine Reptile swagger to Bad Seeds drama, dub dynamics to krautrock repetition, yet all in a coherent assault that transcended the sum of its parts with depraved style and graceful finesse.
Changes may have been afoot in the Hey Colossus camp, yet their latest transmission The Guillotine shows that they’re in no danger of neglecting either their prolific drive or their charismatic flair. Darker and more brooding than their last two records, it’s also perhaps their most richly melodic to date –  the interplay of their three guitar lineup has never sounded more fluent than on these eight songs, nor their songcraft more well-defined.
The end result, captured in the studio by Tim Cedar (Part Chimp) and Ben Turner, is a record whose alchemical charge arrives from a reinvention of loud rock shapes into forms both feral and fresh – whilst Hey Colossus can still bludgeon with overamped vigour, as on the hypnotic and devastating krautrock-Jesus-Lizard hybrid of ‘Back In The Room’, (which also features a guest appearance by none other than Hawkwind icon Nick Turner) they can also deliver the dusky and haunting waltz-time serenade of ‘Calenture Boy’ with uncompromising fortitude, with the new-found confidence and louche allure of Paul Sykes’ vocals at the forefront.
“Lyrically this is the strongest – it’s hard to not be affected by what’s going on in the world” reveals Thompson. “Consequently the music gets more tightly wound around the vocals. If the lyrics were going to be more pointed I wanted the music to be more so also, so I spent time with some classics – (Fugazi’s) Repeater, (Fleetwood Mac’s) Rumours, This Heat’s records, and (Crass’) Penis Envy.”
Explorers of a unique sound and invigorating approach in a decade in which cliches and genre pieces in the realm of the psychedelic have frequently surrounded, Hey Colossus stand alone – transcending the limitations of the underground scene from whence they came, whilst exposing the paucity of inspiration in much of the guitar-rock mainstream.  The renaissance of a band now simply an innovative force in the reinvention of heavy amplification finds another peak with these menacing yet immersive songs. Hey Colossus are at their sharpest, and none will survive The Guillotine.