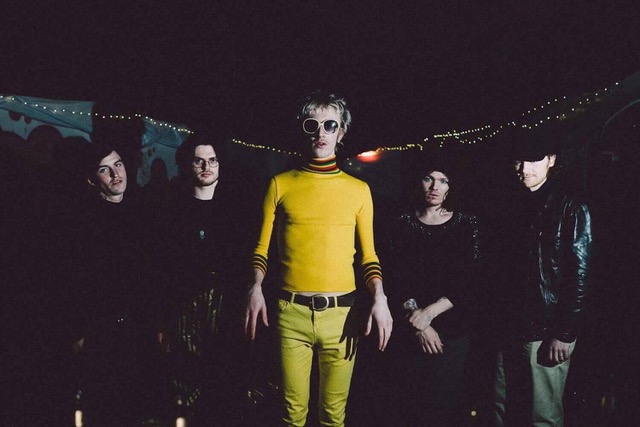 Bradford’s resident psychedelic mad-men FLING have announced a new single ‘Lookin’ Outta My Window’ to be released on Leeds label Dance To The Radio as part of their newly returned 4×12” vinyl compilation series on the 22ndt of April with the track available online from the 17th of March.

FLING were born in Bradford in late 2015. Since then, they have amazed, confused and delighted audiences with their unforgettable live shows. FLING never fail to warrant a reaction in the listener, they produce shock-and-awe psychedelic glam rock that grabs your attention in an instant. The band recently headlined the Brudenell Social Club as part of Steve Lamacq’s 6Music takeover of the venue for Independent Venue Week and were played on his show the very next day.

They will follow this up with a headline tour of the UK in February with dates in Leeds, London, Newcastle and a hometown show in Bradford planned. As well as a performance at this year’s Live at Leeds Festival in April and Gold Sounds in May alongside headliners Cabbage. The band will also be launching their own monthly night ‘Get Flung!’ at Leeds bar Milo where the band will curate and host a night of music each month with a simple call to arms “Come be our friends, come party, come get flung. Look through our windows.”

Their contribution to the 4×12” Compilation is the hazy ‘Lookin’ Outta My Window’. Delving into the mind of a recluse sitting at his window, observing life go by without him, ‘Lookin’ Outta My Window’ is a short, sharp blast of the kind of charming and glam influenced indie rock that is causing so many people to fall in love with this band. The track was produced by the band and mixed by Lee Smith at Greenmount Studios (The Cribs, Sub-motion Orchestra, Pulled Apart By Horses)

The single forms a part of the first in a series of 4×12” compilations from Dance To The Radio Records. The Leeds label, who have released records from bands like iForward Russia! I Like Trains & Grammatics announced its return in 2016.

Dance To The Radio’s hugely influential Compilations have included singles from the likes of Pulled Apart By Horses, Esben & The Witch, Three Trapped Tigers, The Sunshine Underground, Sky Larkin, Paul Thomas Saunders and Das Racist. However, for Dance To The Radio, the focus is not on the past, but the future.

Sally Bryant, Dance To The Radio’s new A&R representative explains why she’s so excited about the band “FLING are a band that to me, represent what Dance To The Radio has always been about but also the exciting things that lay in store for it’s future. I’ve seen them play live countless times now and each time they baffle, excite and draw the audience in to their own magic world. Everyone leaves a full-fledged FLINGER.”

Whats Conkin?- A monthly feature bought to you by Conquistadors [What’s Conkin #2]