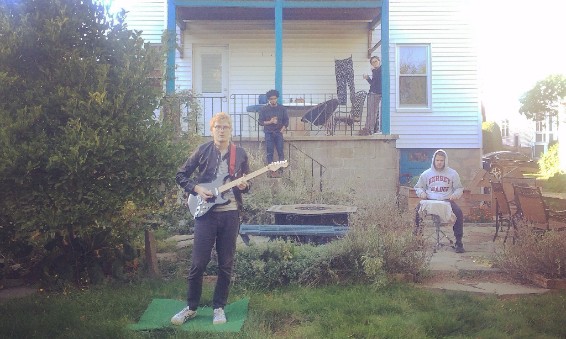 Due Out This April 7th on Designer Medium Records

“Light-hearted guitar-picking flutters over a somewhat garbled low-end, no less meticulous; they play off each other in a way you’d think it the soundtrack to butterflies during mating season.

Kaplan’s collected, yet confident voice blends in between the two tones, a fettered stay in the slow rotation of a microwave. Distant sounding snare drumming comes off almost as background noise, as though he’s playing and singing to himself in the middle of a bustling coffee shop. The Craters seem to address song construction and say, “they just don’t make ‘em like they used to.” The chorus introduces a heartbeat you didn’t know was there, a hollowed and incessant kickdrum pounding in your chest and making you the kind of alive one feels when confronted with death, as Kaplan croons, “we can close our eyes, we can share the dark, with the lights out.”

The Craters Is Wes Kaplan. Born and raised in Boston, MA, Kaplan sits in his room and records another collection of songs that fall somewhere between Pet Sounds-era Beach Boys, My Bloody Valentine, Merriweather Post-Pavilion style pop and complete noise-abstraction. Neurotically edited, Kaplan’s music is pleasing to the ear whilst still obtaining a death that can be explored upon further listens.

Kaplan’s main interest is in mixing the absurd with the beautiful, and how context can change how something is heard. All of that aside, the hooks and catchiness of his songs are simply undeniable.

American English, Kaplan’s follow up to the Kids Can Tell EP (both released on Nashville label Designer Medium) shows him still serving up artistically expressive pop numbers with his classic use of strange lyrics that deal with subjects like God, the uncompromising ambiguity of relationships, beauty, and just plain old walking around. His mix of conventional rock instrumentation and electronics is subtle to the point one may not even notice at first. At points he completely deconstructs sounds and ideas to present bare pieces of a whole, completely torn apart and left on display, while at others he has a well crafted, sturdy compositions begging for replay.

American English is Kaplan’s most uncompromising and honest statement to date. Kaplan takes songs and turns them into compositions, he takes bedroom-pop and turns it into chamber music. For the lonely, misunderstood and yet loving college kid in all of us.

Anna Tivel’s Shares New Album at NPR Music, “The Question” Out 4/19 On Fluff And Gravy Records