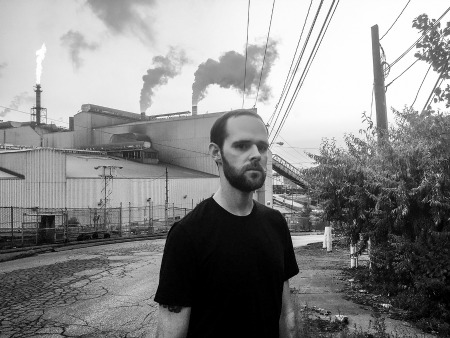 STEVE HAUSCHILDT SHARES ‘TIME WE HAVE’ VIDEO FROM HIS RECENT LP STRANDS (KRANKY)
[DIRECTED BY SARA LUDY]
Kranky’s craftsman of electronic kosmische enchantment, and once a member of the seminal outfit Emeralds, Steve Hauschildt last year released his latest LP, entitled Strands. Today we are pleased to share a new video for the song, ‘Time We Have‘.
Director Sara Ludy reveals how this collaboration came about…”Steve and I manifested a collaboration through a mutual appreciation of each other’s work. As I was preparing to get in touch about a VR collaboration, he got in touch first. We met up while he was in Chicago and we talked about a video for Time We Have“. Steve Hauschildt explains his thinking behind the VR collaboration revealing that he “wanted to try and capture that moment in nature and society where life slowly reemerges through desolation, so it has a layer of optimism looming underneath.” The Cuyahoga River was also an inspiration to him, particularly the 13 fires that occurred as a result of industrial pollution in the 1960’s. Sara continues…“With this in mind, I set out to build a virtual environment while listening to the track on repeat. The day-to-day repetition of the song alongside the current political climate ignited a vision of a dreamland in decay, through which a journey to a brighter future takes place.”

WATCH THE SARA LUDY DIRECTED VIDEO FOR ‘TIME WE HAVE’

Graceful compositions ﬂow throughout Steve Hauschildt’s fourth release for kranky with the songs fluctuating from the serene calm of album opener ‘Horizon of Appearances’, to the searing grandeur of album closer ‘Die in Fascination’ and to the aforementioned pulsing hypnosis of ‘Ketracel’. Throughout, Steve remains restrained and in complete control of his sound, a true artisan in experimental electronica.
Steve further comments on the themes and thought behind Strands with the following…”Strands is a song cycle that is about cosmogony and creation/destruction myths. The title alludes to the structural constitution of ropes as I wanted to approach the compositions so that they consisted of strands and ﬁbres which form a uniﬁed whole. This was so the songs could have the appearance of being either taut or slack without being fundamentally locked to a grid. So the sounds/tones have a certain malleability to them and sound like they’re bending through time. It’s also grittier and more distorted than my previous albums…It’s a very personal record for me as it is a reﬂection of my hometown where I grew up and where it was mostly recorded.”
STRANDS TRACK LISTING:
1. Horizon of Appearances
2. Same River Twice
3. A False Seeming
4. Ketracel
5. Time We Have
6. Strands
7. Transience of Earthly Joys
8. Die in Fascination
Strands is available on LP, CD and digital formats.
www.kranky.net