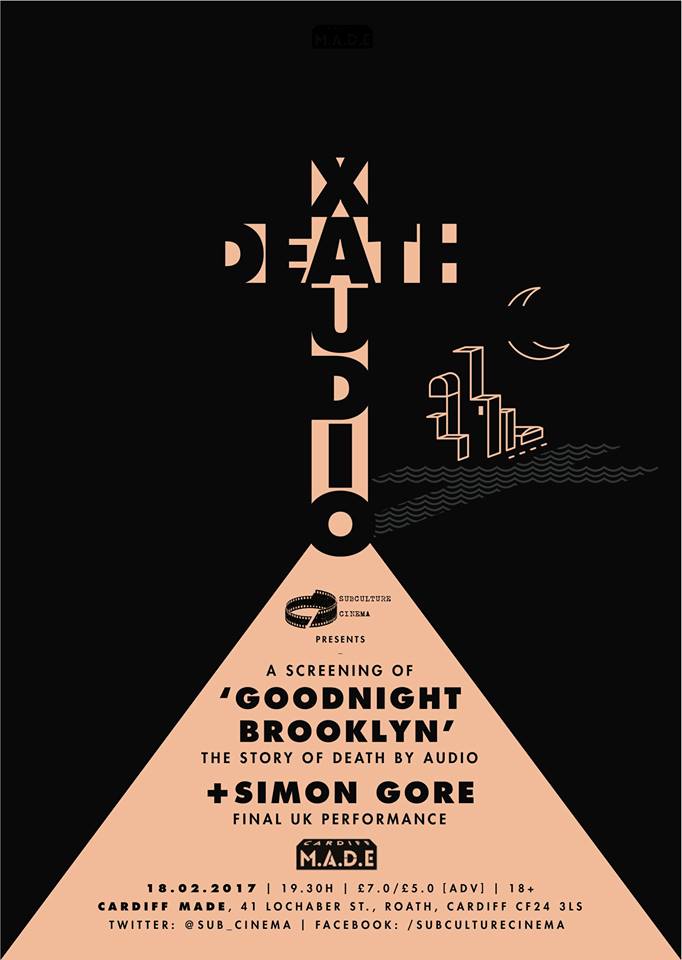 For years Death By Audio served as a music and art venue, home, and guitar pedal manufacturer in a not-so-long-ago unsavory corner of Brooklyn, NYC. The warehouse come DIY venue contributed to cultivating a thriving underground music scene in the Williamsburg area – a former industrial and working class neighbourhood now synonymous with trendy joints and artisanal drop-offs that so often arise alongside the moneyed in their quest for cultural authenticity; a quest that unfortunately often only serves to eventually hollow out such areas of any cultural substance, as this film eloquently expresses.

The irony in this story however is that it was at the hands of Vice Media, the media outlet recognised as bearing the torch of exposing underground culture, that Death By Audio was forced from their warehouse premises; bringing an end to the DIY venue.

The film eulogises the closure of this autonomous space through the words of the people behind it; highlighting the moments it created, as well as documenting its ultimately futile battle to survive against the might of a multi-national company. ‘Goodnight Brooklyn’ is a stark demonstration of the crushing effect gentrification can exert on creative communities.

The threat to DIY culture by ‘urban development’ is a worrying and growing trend that is being played out in each of our cities, including in Cardiff. Subculture Cinema will play host to this film, as well as a broader discussion around DIY culture, through the mediums of art and music by local people in Cardiff’s creative community.

‘Subculture Cinema’ is a multi-platform arts event circulated around films that explore subculture by taking a look at the people, places and activities that define the ‘in focus’ cultural formation.

‘Subculture Cinema’ is a collaborative project that brings together artists, spaces and audiences, which perhaps would otherwise not collide, in order to create unique artistic experiences while exploring discussions around cultural formations.

Available through Cardiff MADE gallery

‘Goodnight Brooklyn – The Story of Death By Audio’ 1hr22min

“Goodnight Brooklyn – The Story of Death By Audio brings viewers inside the last underground venue for music and art in Williamsburg, Brooklyn, a neighborhood once defined by its cultural contributions to the city of New York. The feature length film chronicles the origins, community¬-building, influence and ultimate closure of one of Brooklyn’s best DIY venues, ironically at the hands of a former champion of their efforts.”

“ÉN TI is an electro minimalist visceral projection which will play havoc with your emotions. The perfect score to a dark, eerie, nordic tale. Utilising sequences to format his minimalist orchestrations and polyrhythms, Simon projects a soundscape which will entice your imagination.” – Circuit Sweet

This will be his final performance in the UK before leaving these shores to live the Nordic dream.

Peter Evans is a Cardiff based photographer who was present to capture the final night of the much loved and sorely missed art and music venue, The Abacus.

“Let me tell you a story…

There was a place in Cardiff loved by many. It housed exhibitions, works of photography, paintings, sculpture and performance by local artists well-known and obscure, dedicated and dabbling. For a year and a half it was that rare thing for Cardiff – a lively and ever-inventive haven for the arts smack-bang in the centre of the city, embracing the public and lending support to charity and community projects. For that beautiful, brief time it was a giddy and wild ride. The passion that went into the place was thrilling to witness, the grief it came to with the numerous burglaries heartbreaking. And after an all-too-short eighteen months the council announced it would be not renewing the licence, and that the premises would have to be vacated to make way for a Boots chemist, the building itself to be later levelled to make way for the new transport hub development.

Like the proverbial Roman Candle blazing bright and abruptly fading, The Abacus met a sad fate common to many music and arts venues in Cardiff. But it was not destined to fade quietly into that good night. The message went out: Artists Assemble! The doors were flung open to the public for a finale that had the raucous, incredible energy of the greatest of Irish wakes…”

Peter’s photo exhibition will be a bittersweet eulogy to this much missed, but not forgotten, DIY venue.