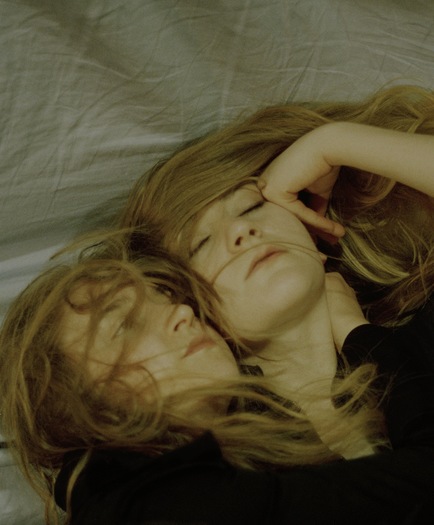 Pharmakon, the industrial noise project of Brooklyn based artist Margaret Chardiet recently announced Contact, her third full length LP for Sacred Bones, which upon its release will mark the 10 year anniversary of the project.

Today she is sharing the second single from the album, a track entitled “No Natural Order“.  The intent, and meaning behind the track is explained by Chardiet below:

“With “Natural Order” defined as the concept that humans have an inherent right (and therefore implied responsibility) to continue the human species, which claims humanity as the center of everything in existence – the sole sentient being, master of the universe – I argue that there is NO NATURAL ORDER (and no positive law, and no divine law). That there is no single true history or truth; that all societies, all systems of law, all systems of logic, are constructs that may be deconstructed. We own and are owed nothing. Our existence is chance by nature. No better than a hog or slab of stone. Just cells in a virus…”

“…My interest in making this argument, is to point out that if humans could relinquish their ridiculous dream of ownership over the “right” of existence, that they can also relinquish their ridiculous hopes of control over one another. I believe the theory that humans are the chosen custodians of the universe is toxic, and inevitably leads us to the conclusion that in fact some of us have more of a right than others. That this is the source for much of our struggle of power over each other. To stake our claim, find our place. To give our lives meaning over others. If we accept that it’s all meaningless, perhaps we could stop cannibalizing ourselves, and ironically have a chance of surviving as a species. Not that it matters if we do.”

hance nature of existence
ours is of no special significance
all things opposed to reason
logic is a construct of the human
despite all our scrambling rejections
we cannot transcend all of our instincts
just animals, lost in a confused dream
where Mankind is real,
and at the center of everything”
PRE-ORDER: Pharmakon – Contact
hyperurl.co/Contact
TOUR DATES

“It is an awful and ugly time, and if we are going to fight through it, a song like “Transmission” should remind, not relieve, us of that truth.” – PITCHFORK
https://www.sacredbonesrecords.com/collections/pharmakon