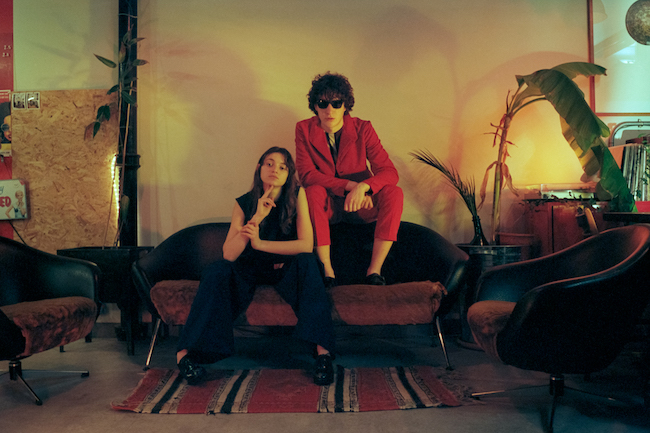 PARK HOTEL
DEBUT SINGLE ‘GONE AS YOUR FRIEND’ OUT NOW ON FIERCE PANDA
WATCH VIDEO
LIVE AT THE VICTORIA, LONDON ON 14 MARCH
Park Hotel are a post-electronic dance band based in London, UK. Centred on the creative duo of Tim Abbey and Rebeca Marcos-Rosa, they explore the mirrorball-noir territory between alternative arena electronica and wired downtown songwriting. ‘Gone As A Friend’ is their frankly terrific debut, laced as it is with supercool boy / girl vocals and a lovely supple groove.
Park Hotel have now shared ‘Gone As A Friend’ video. Directed by Victor Duchêne, the video is a portrait of the sleek dusky world Park Hotel’s music inhabits.
https://soundcloud.com/parkhotelband/gone-as-a-friend
https://open.spotify.com/track/5kLcfSOckSf9mh1TU7qWW8
Live their metropolitan disco-rock studio incarnation expands into a steamroller six piece neo-funk band, featuring three-way vocal harmonies, two guitars, drums, percussion, keyboards and ample cowbell. They sound like a joyfully communal face-off between LCD Soundsystem and Earth, Wind & Firewith flashes of Talking Heads and even a sprinkle of Steely Dan.
Following their headline show at The Lexington last week, Park Hotel have confirmed a new London show in March, with more to be announced soon:
Thursday 14 March  2017: The Victoria – London, UK – TICKETS and EVENT INFO
Park Hotel first entered a recording studio in 2016 to work with producer Eliot James on two tracks ‘Gone As A Friend’ and ‘other tracks, handing them over for mixing to Nathan Boddy and mastering at New York’s Sterling Sound. After playing a series of feverishly received under-the-radar London shows in Autumn 2016 the band debut single ‘Gone As A Friend’ is out now on Fierce Panda. An album of immaculate dance-craft waits in the wings. Reserve rooms early for 2017.
BUY ‘GONE AS A FRIEND’ on Apple Music | Amazon Music
www.parkhotelband.com
www.facebook.com/parkhotelband
www.instagram.com/parkhotelband
www.soundcloud.com/parkhotelband