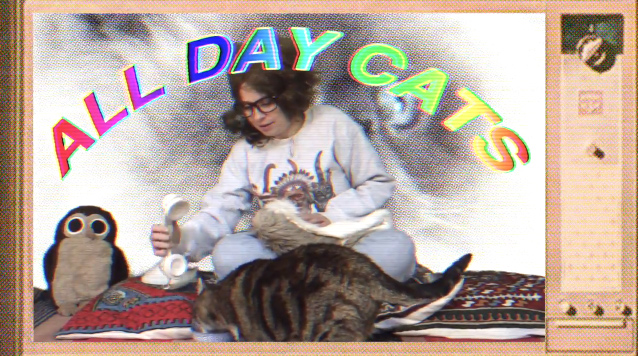 New British band, Lucky Shivers have quelled winter blues for true music fans by releasing their heart warming debut video for single, Human By Night via a trashy hotline hunt. Just call the free number, 0800 68-YE-HAW and follow the instructions on how to find this very special visual treat online.

The bizarre new video was shot by the band on Jo’s phone one very cold evening and edited the morning after. The budget stretched to a £10 green screen and some tin foil for Gareth’s hat and also features Jasmin the cat whose cameo was filmed in just one take.

Human by Night is the first release from Lucky Shivers, a 4-piece made up of four friends from London and Northampton who’ve been working on a record above a karate studio in Leicester. Fronted by the half American, half illustrator Nicholas, and his long-time friend and collaborator handsome dramatic performer Kieran, the duo are elevated substantially by the talented cat lady Jo and Claw Crane Machine expert Gareth who they met at a Christmas party.

This catchy debut single will be released on a glittery, limited edition cassette on February 17th via the Shipping Forecast Music Company. The rest of the story will continue throughout 2017. Pre-order it now on itunes.