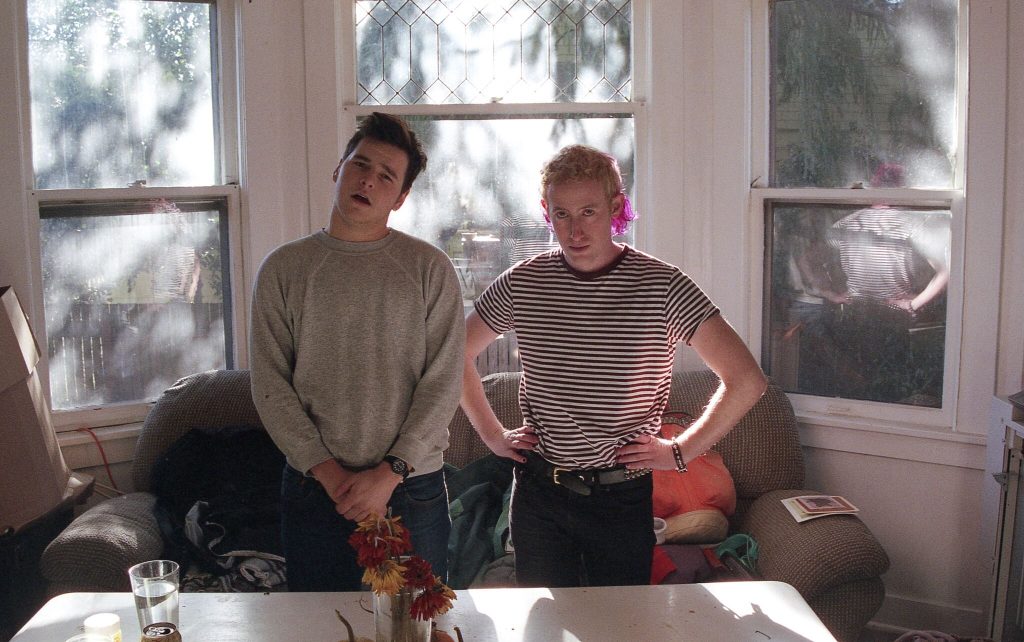 S/T Debut Due Out March 24th via Good Cheer Records

These are dark times, and we need to take care of one another. That is the refrain being repeated at DIY shows across the country in 2017, and nowhere is it heard more clearly than on the second LP from Dan Byers and Julian Morris, eponymously titled Little Star.

This often sublime, occasionally brash and always captivating record stakes the bold claim that turning inward is not ignoring the world, that an outward orientation does not come at the expense of self-care. Happiness, claims Little Star, is an action.

Byers would know: Little Star is the sound of this dual embrace of the internal and the external. His songs emerge form the private domain of the bedroom musician, in which the line between writing and recording, between creation and capture, is blurred to disappearance. There Byers hones his distinct songwriting voice—the Cure’s sparkling melancholy brought to bear on a half century’s worth of classic pop songwriting, pressurized with punk energy, darkened with the dissonant drama of hardcore, and infused with Byers’ tender sense of humor. “[Bedroom demoing] is my favorite way to express myself musically and I will always do it, regardless of if I’m also playing with a band,” Byers says. But one listen to Little Star will leave you thrilled with the band he’s found.

Below the record’s often tranquil surface simmers a set of songs that confidently embrace contradiction. Little Star is everything the notion of a self-titled sophomore effort implies: an artistic benchmark that in the same breath both coalesces the group’s work to date and announces itself as the point of departure. “I stayed away from talking about romantic relationships and that particular kind of heartbreak I talked about over and over on Being Close,” says Byers. Sonically, Little Star is mature older brother to last year’s debut; thematically, it’s more like a distant but familiar cousin.

If that all sounds too lofty, know that it’s a concrete, lived polarity that dominates the record’s first act: Byers’ experiences on and off Zoloft. “Anti-depressants make me feel real numb and I hate that,” he says. “I unfortunately want to die when I’m not on them.”

It’s the ugly Catch-22 of a generation on SSRIs, one that Byers transforms into empowering anthems of self-care. “I’ll take a walk today/ and tell myself that it’s ok,” he sings by way of example. “Some of my songs are meant to be hopeful and encouraging to people who struggle with that particular dilemma,” he tells me, and there’s no denying his success. “I can take this feeling/ and make it useful/ to someone else,” reads one self-fulfilling line.

Elsewhere Little Star brings us absorbing meditations on the things that instill a life with value. “Sonia” celebrates the happiness a friendship can bring, the outro’s guitar solo imparting a slice of that warmth to the listener before the band carries the song away with palpable joy. “Linda Blair” gives the listener a window into Byers’ obsession with horror movies, the song’s self-aware camp reminiscent of perhaps some of the less distinguished titles in which its Exorcist star namesake has appeared.

The record is full of these small captivating moments of form merging with function. Every listen reveals new joys: an unusual guitar chord lending a lyric more resonance, a vocal harmony quickly burrowing its way into your spine before it’s gone just as fast. “I feel the pressure behind my eyes,” sings Byers, as the very melody lifts a weight from the listener’s shoulders.

It’s also the sound of seasoned live band hurling Byers’ delicate melodies forward with a ferocious energy. “Yamaguchi,” one of the record’s striking meditations on anti-depressants, sees the group evolve a lilting lead vocal over a dizzyingly cyclical chord progression until it threatens to unravel from it’s own momentum. “Improv,” something of a seventh inning stretch from Byers’ typically dense compositions, oscillates between two chords and a spoken lyric with a similar controlled rage; the effect is a bit like hearing EVOL-era Sonic Youth cover only the bridge to a Tom Petty song.

“Every day I find new ways of feeling pretty,” sings Byers on “Calming Ritual #1.” As long as he keeps sharing what he’s found with his band, and with the world, there’s no doubt we’ll all feel pretty too.