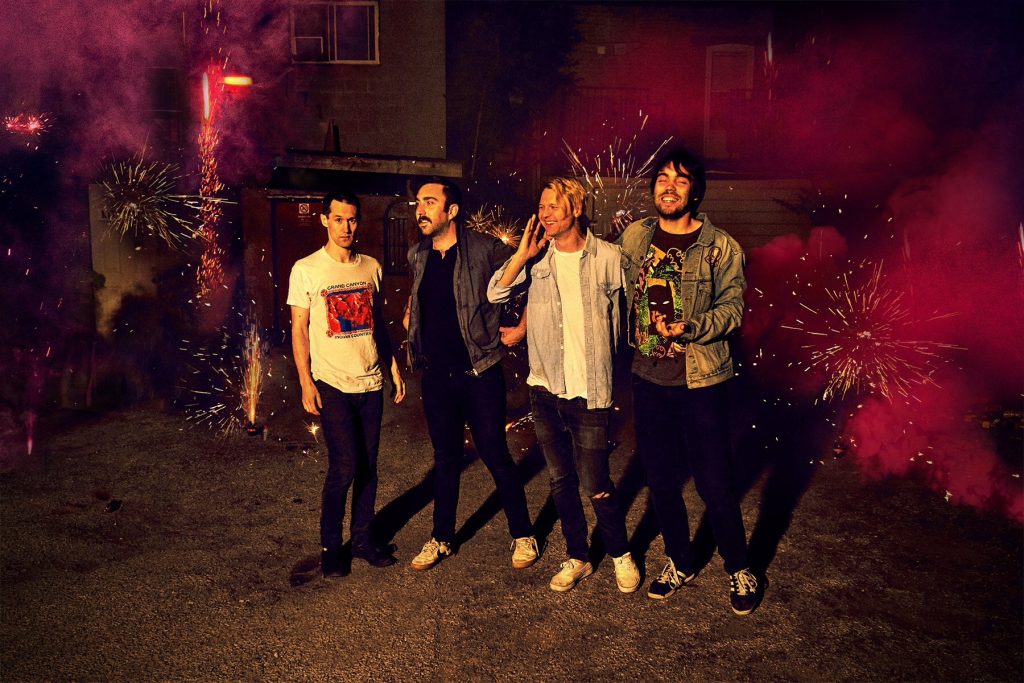 Toronto, Canada’s most energetic indie rockers, Hollerado, have announced their new full length, Born Yesterday, due out April 14th on Royal Mountain Records (PUP, Alvvays, Mac DeMarco). To celebrate the announcement the band has teamed with BrooklynVegan to premiere the lyric video for their politically biting new track, “Grief Money”.

Hollerado excel at writing elemental rock & roll, the kind of music that’s fueled by performances so kinetic that it feels both satisfyingly familiar and refreshingly creative. Born Yesterday is a vibrant windows-down rock record that reminds listeners that guitar music can be fun and powerful at the same time. “Grief Money” is driven by a deep bass groove that lays the groundwork for big guitars and even bigger hooks. BrooklynVegan called it “a Gang of Four-style angular funk-punk attack”.

The infectiousness of “Grief Money” belies its scathing lyrics that tear down exploitive distributions of power. Singer/guitarist, Menno Versteeg said, “We wrote this song before Trump was even a candidate. It’s sad that it’s an age-old problem; people who are stronger, wealthier, or more powerful trying to impose their will on others.” The singer does see some hope, saying, “we are now way past the point of worrying about being cheesy in a song. We have to say something whenever we have the chance. It doesn’t even have to be articulate, as long as the intention is true, the message will send. And we have to do the right thing whenever we can. Small acts of kindness and protest WILL make a difference.”

Hollerado, who have previously toured with and supported Weezer, Jack White, Flaming Lips, and Julien Casablancas’ Voidz, are looking to keep up their busy pace with a lengthy run of tour dates already announced for 2017. See full itinerary below.

Physical and digital preorders for Born Yesterday are available now.

Bio:
Hollerado’s debut album Record In A Bag came out in 2009 and received a Canadian JUNO award nomination for Best New Artist. Their incredible “Americanarama” video garnered over 1.4 Million YouTube views with its forcefully creative approach to video making, and the album spawned the Top 10 radio hits “Americanarama” and “Juliette” as well as Top 20 radio hit “Got To Lose.” The launch of White Paint followed, their 2013 studio release, which included the Top 10 song and video for “So It Goes,” a wrenchingly personal story about lead singer Menno Versteeg’s Dutch grandfather, whose life life was spared in World World II. Hollerado’s band ethos is centers around building a community of music loving fans, so it’s no surprise that 2015’s 111 Songs was a project where they wrote custom songs for specific fans. This exhaustive continuous songwriting project built the working framework for the release for their new album, Born Yesterday, a record that taps into the pillars of rock & roll.