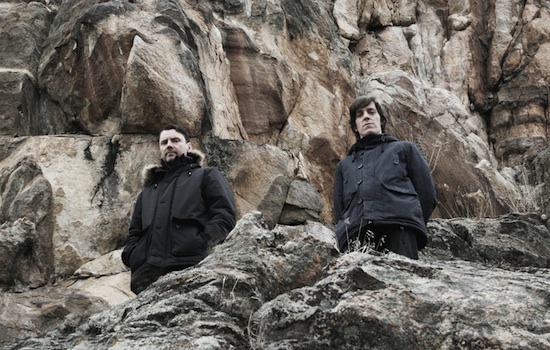 photo supplied by the band

CINDERLAND
RELEASE DATE: 10/03/2017
Scott Morgan (aka loscil) and Mark Bridges have together produced their debut album as High Plains, taking to the high altitudes of mountainous Wyoming to create a record faithful to both the grand landscapes extending below them and the rich contemporary electronic pedigree of the respective members. Titled Cinderland, the LP will be coming out via kranky in March, and today we can share another glimpse from it, via the track “Black Shimmer”…
LISTEN TO ‘BLACK SHIMMER’
You can still listen to album opener ‘Cinderland’
Morgan, based in the Canadian Pacific Northwest, is predominantly known for his drifting, textured soundscapes released under the pseudonym loscil. Bridges is an accomplished, classically-trained cellist residing in Madison, Wisconsin. The two met in Banff, Alberta while they were simultaneously there on residencies at the Banff Centre for the Arts in 2014. They first collaborated when Bridges contributed cello parts to Morgan’s generative music app ADRIFT, recorded in Seattle in 2015.
In early 2016, the duo embarked on a collaborative set of compositions in the oxygen thin air of Wyoming, spending two weeks holed up in a refurbished school house in the town of Saratoga, where this album was recorded. Inspired by Schubert’s Die Winterreise and the rolling landscapes of their surroundings, the collaboration culminated in a collection of recordings that evoke a shadowy, introspective and dizzying winter journey. Cinderland takes cues from classical, electronic and cinematic musical traditions but is mostly a product of the rugged, mythic landscape; vast and sprawling with a wild, uncertain edge. The recording was made with a portable studio and all sounds were sourced on site, most notably from Bridges’ cello, the resident Steinway D piano, and field recordings collected from the local soundscape.
The results are a site specific, wide scope view of the high valley terrain the duo worked in, a mix of analog and digital, neoclassical and modern electronic sounds, a complemental series of tracks to become absorbed in, a truly deep listening experience. The cover art for Cinderland was created by London-based artist, Peter Liversidge.