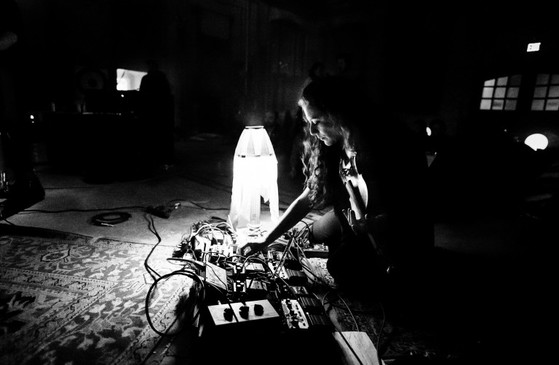 CONSTELLATION RECORDS ANNOUNCES NEW ALBUM BY JESSICA MOSS, POOLS OF LIGHT,
RELEASED 5TH MAY
Constellation are thrilled to announce their fourth release of 2017: Pools Of Light, the label debut of Montreal violinist and composer Jessica Moss. After years of involvement in, most notably, cult post-punk band Thee Silver Mt. Zion Memorial Orchestra, Moss has channelled motility and grace into this work of two side-length multi-movement compositions.

With Pools Of Light, Moss has developed a distinctive and impressive approach to violin that combines a natural technical fluidity, a recombinant command of folk, classical and modern idioms, and an adventurous exploration of signal-bending and analog effects that uniquely expand the spectrum of the violin as sound source. The compositions unfold at a stately, inexorable pace, combining sound-art and signal-processed timbres, extended melodic and contrapuntal lines, and the periodic deployment of stark, minimalist vocals.

“Entire Populations” is a 24-minute tour de force on Side One, opening with gently blown-out solo violin layering a maqam- and klezmer-inflected theme that gradually recedes to near-silence as vocals are introduced, with Moss singing a single phrase (anchored by the song’s title) which builds up anew in careening stacked vocal loops, towards a majestic juxtaposition of dive-bombing electronics and strident melodic string excursions, ending in a tender scorched-earth denouement. “Glaciers I” and “Glaciers II” on Side Two are more explicitly textural and cinematic, moving between minimalist and maximalist, widescreen and intimate, ice and heat; a highly compelling suite of drone-inflected, nuanced and subtly plaintive instrumental pieces.

Moss explains: “As a solo performer, I feel an alignment with the transportive nature of storytelling tradition. My music is narrative, and I feel it’s subjects are already on everyone’s mind (climate change, refugee crisis, plastic garbage island floating in the sea…). My aim is to create a space where we can reflect on these things together. I prefer not to use too many words to relate; once the ideas are contextualized, conjuring images with sounds and melodies feels just as powerful to me and also more accessible in many ways. I don’t have an agenda, certainly not a solution, just a great sense of empathy and desire to be sharing space and experiences. I believe that having these transporting moments together can be both a balm and a way to receive energy to move forward, to engage.”

This is elegiac durational music at the intersection of neo-classicism, soundtrack, electronic, art-punk and avant-folk – a decidedly organic, non-academic, profoundly searching and emotive work, guided by Moss’s liner note mantra: “FEELING LOVE IN A MELTING WORLD”.
Pools Of Light is available across all formats via Constellation Records on 5th May, the album is available for pre-order now via the label’s website
Constellaton Records

Uniform share new single “The Killing Of America”, Wake In Fright due 20 Jan on Sacred Bones