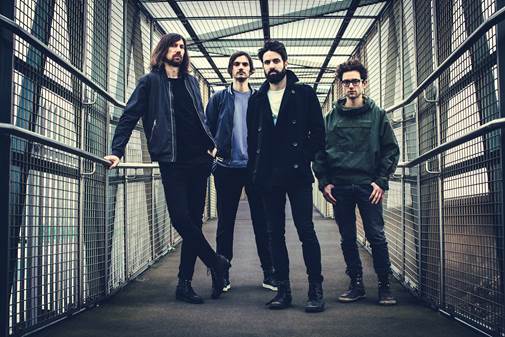 Out now via League of Imaginary Nations / !K7

‘Over ghostly chords and a rhythm that the dead would march to, singer and lyricist Guy Connelly’s falsetto floats like a knife through fog’ Consequence of Sound ‘[On ‘In Memory’]

‘[Changeling] sees the trio gun for poppier territories, using their atmospheric synths and electronics to create a particularly robust synthpop sound.’ The Line of Best Fit

Comprised of Guy Connelly (vocals, guitar, sampler), Andy West (bass, guitar), Che Albrighton (drums), and Nic Nell (keyboards, vocals,) synth-driven London quartet Clock Opera have unveiled their second album ‘Venn’ via League of Imaginary Nations and !K7. A darker beast than their 2012 debut ‘Ways to Forget,’ the distinctive sound of Clock Opera — the agile alto voices, a sleek and supple rhythm section, immaculate production — is still present, but there’s a marked shift in lyrical tone. “A lot of the album is about loss, absence, holes, haunting, questioning identity,” explains Connelly. “To be specific, the majority of the songs were inspired by a miscarriage. A lot of the others were driven by the fallout from it.” Although a darkly cerebral and grief-ridden record in theme, ‘Venn’ is as uplifting as it is sinister and ghostly, menacing and euphoric in equal measure. It’s an album named for “the intersection, the shared part, the hole in the middle.”

The enveloping production of opening track ‘In Memory’ – a track about “questioning your identity, about being judged on who you are vs what you were vs what you were expected to be vs what you might end up being” – sets a haunting tone of loss and disbelief. Whilst retaining aspects of the distinctive, homemade sample-led palette of their debut, it introduces a darker, more rhythm-led sound of ‘Venn.’ ‘Changeling’, with its hypnotic loop of church bells, recorded on a day off whilst touring Germany, sees Connelly in the midst of shock, his vocals possessing an aura of intimacy over the complex, overlapping percussive touches.

Next single ‘Whippoorwill’ throbs like an open wound, its narcotic churn reflecting the myths and legends about the titular bird being a vessel for souls after death. From struggling to let go, ‘Hear My Prayer’ hints at themes of religion and spirituality whilst finally relinquishing control to an outside force. These themes and “the dark restriction of freedom” are heightened by the contrast of Connelly’s restrained vocal performance in the Right To Be Forgotten inspired ‘Ready Or Not,’ the crystalline mix of splinters and shards cutting against arrhythmic clatter. ‘Dervish’ is the most actively political song on the album. Fizzy electronic glitches shimmer alongside the tune’s mournful melody, inspired by the image of a Turkish dervish dancing in an Istanbul protest

Drawing ‘Venn’ to its conclusion, ‘When We Disappear’ moves from bare lament to final emergence into hope, marking the loss of one and the arrival of others. “I’m a drop in the ocean, I’m an ear on the plain. Are we the ones we’ve been waiting for?” It’s haunting yet uplifting, a fitting end to an album pieced together through loss and the different stages of unravelling grief.

Recorded at home and at Squarehead Studios in Kent with Kristopher Harris (Bear’s Den, Smoke Fairies, Matthew & The Atlas, Story Books) over the summer of 2015, ‘Venn’sees Clock Opera entering new and exciting territory.