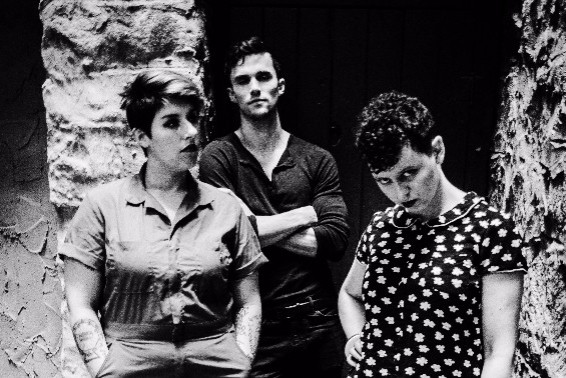 Brooklyn’s A Deer A Horse Announce Backswimmer EP, due out March 10th via Custom Made Music

A Deer A Horse are excited to share “Backswimmer,” the first single and title track from the band’s upcoming EP. Due out March 10th via Custom Made Music, the Brooklyn trio have become one of the city’s hardest working bands and it shows on their latest single. AV Club premiered the track, saying it “opens with a doom metal dirge while still having a huge vocal hook. In a way, it sounds like the Melvins turning in a pop song, finding ways to keep a hook running through a song that’s otherwise grim and sludgy.”

Speaking about the song, the band shared:

“‘Backswimmer’ is inspired by the series Making A Murderer, and named after an insect that, while swimming, can see both above and below the surface of the water with its large split eyes. The song itself came from a home recording Rebecca made with a very Devo-esque monotonous bass line. She brought it to rehearsal, but like most of our songs, we ripped it apart and put it back together. Rebecca penned the lyrics with the concept of someone constantly swimming against the tide, partially submerged or stuck in an inescapable cycle. It’s that idea of taking two steps forward and one step back, unable to escape a system designed to work against you.

As a finishing touch, Dylan had the idea of adding in a series of grooving offbeat hits as a bridge. In a way, this mind-fuck of a bridge is reflective of the greater meaning of the song: just when you think you know what’s going to happen next and you have it all planned out, the bottom drops out and you’re left reeling.”

The band will be heading down to Austin around this year’s SXSW; full dates can be found below.

Dark, heavy, and full of tension, A Deer A Horse’s music is a rare breed in Brooklyn’s DIY scene. Comprised of Rebecca Satellite (vocals/guitar), Angela Phillips (bass/backing vocals), and Dylan Teggart (drums), the trio have embraced the raw and dirty aspects of their city and created something simultaneously urgent, sludgy, and cathartic with their upcoming EP, Backswimmer. Set for release on March 10th via Custom Made Music, Backswimmer captures the band in their most primal form, a collection of songs that find the band diving into the abyss with pounding rhythms, enormous riffs and inescapable melodies. Backswimmer, named after an insect that, while swimming, can see both above and below the surface of the water with its large split eyes, captures a similar duality in both the dark and the light.

A Deer A Horse formed back in 2011 while Satellite and Phillips were students at Sarah Lawrence College and they have been playing music together ever since. The current version of the band formed in 2015 when Teggart joined, changing the band’s direction as the thundering rhythm section began to channel the weight of their lyrical content.