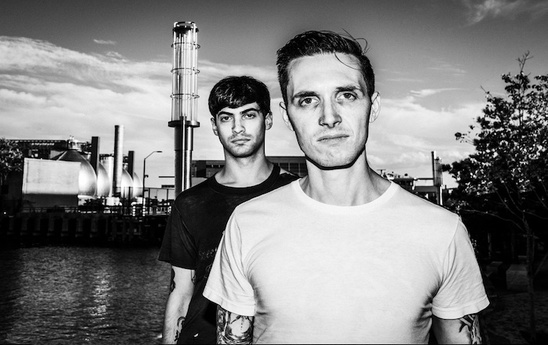 UNIFORM DEBUT POWERFUL NEW VIDEO ABOUT GUN VIOLENCE,
WATCH “THE KILLING OF AMERICA”,
WAKE IN FRIGHT OUT TODAY VIA SACRED BONES
Uniform hit us with their powerful new video (directed by Yussef Cole) for “The Killing of America”, the recent and second single from the NYC duo’s full-length, Wake In Fright out today on Sacred Bones. The band explains “Released to a limited audience in 1982, Leonard Schrader and Sheldon Renan’s documentary ‘The Killing of America’ served to paint a stark portrait about the realities of gun violence in the United States at that time.“
“In the 35 years since the film’s inception, the statistics regarding firearm deaths in this country have not improved. Highly influenced by Isao Hashimoto’s piece on nuclear weapons titled ‘1945 – 1998’, our video intends to present basic figures surrounding a complicated subject. We do not wish to moralize and we offer no answers. Instead, we ask the viewer to use this data as an aid towards formulating their own conclusions.“
LIVE SHOWS
09/02/2017 – Brooklyn – NY, Brooklyn Bazaar, (w/ Black Marble)
16/02/2017 – Seattle – WA, Barboza
17/02/2017: Vancouver, BC Astoria
18/02/2017 – Olympia – WA, Obsidian, (w/ King Woman)
19/02/2017 – Portland – OR, Bunk Bar, (w/ King Woman)
21/02/2017 – Reno – NV, Holland Project
22/02/2017: Oakland, CA Starline Social Club
23/02/2017 – Los Angeles – CA, Union
24/02/2017 – San Diego – CA, Hideout, (w/ Black Marble)
25/02/2017 – Phoenix – AZ, Lunchbox
In case you missed it, Uniform recently joined forces with Pitchfork TV  to perform their last single, ‘Tabloid’, in the back of a box truck speeding through Queens, NY.  Filmed all on GoPro and directed by Jim Larson, watch ‘Tabloid’ here.
Wake In Fright by Uniform is released today through Sacred Bones Records

TRACK LIST
1 – Tabloid
2 – Habit
3 – The Lost
4 – The Light at the End (Cause)
5 – The Killing of America
6 – Bootlicker
7 – Night of Fear
8 – The Light at the End (Effect)
“A mind-blowing and extremely addicting rhythmic work. Wake In Fright puts Uniform next to other legends like Big Black, Godflesh, Killing Joke, Ministry etc. A filthy pleasure.” – MUSIC AND RIOTS
“has black metal’s penchant for fatalistic repetition, and Berdan’s distant screech itself could work in that genre; even by black metal’s standards, this is spartan”
– PITCHFORK
“the pair creates a sound that is rooted in punk and hardcore, but branches into metal, electronics, industrial, noise and a slew of other sounds, all to create their own version of an M1A1 Abrams – a bulldozing, take-no-prisoners, mechanized assault vehicle”  – CLRVYNT
“searingly raw…combines carefully defined full-body distortion with bittersweet melodies.”  – THUMP
“bone-rattling” – STEREOGUM
“[Tabloid] a rabid, sprawling beast of track that rips the heart right out of the day…Reckless and relentless throughout, the three-minute track swells with a gargantuan sense of power, the snarling lead vocals barely subsiding for a moment as the dense, skewed guitars power onwards amid the swirling mass of dark atmosphere. An eye-popping, formidable introduction…brilliant” – GOLD FLAKE PAINT
“It’s crisp, sharp-edged and dangerous, and culminates in a full-on sonic supernova of mangled noise.” – AURAL AGGRAVATION
UNIFORM | FACEBOOK | TWITTER | INSTAGRAM | SOUNDCLOUD | SACRED BONES