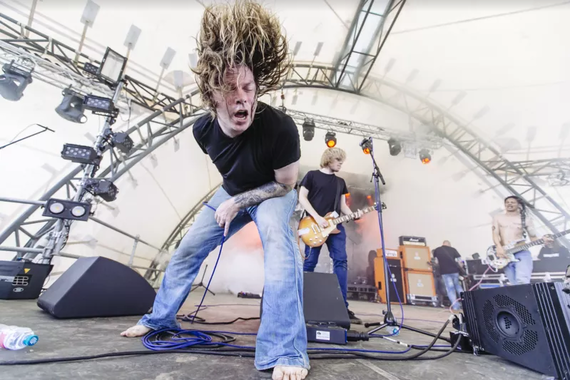 After two successful EP releases on Holy Roar Records, British heavy progressive five-piece OHHMS return with their debut album “The Fool”, due out March 31st on Holy Roar Records.
OHHMS have developed a loyal following amongst those that love their rock sludge-fueled, progressive, heavy and intense. Spanning the course of sixty minutes, “The Fool” delivers five thunderous songs that focus on corporate and personal politics, taking their lyrical cues from the likes of Crass and politically-charged hardcore punk, all the while wrapping these critical themes in elegant tarot-inspired packaging courtesy of Italy’s Black Sails Design.
On top of this, each copy of the album comes with three tarot cards, which when pulled from a copy delivers an individual reading for each listener.
The band comments on the making of this new record: “For this past year and a half, we have been creating ‘The Fool’ and it has been an incredible time for us. From the initial concept to the composing of the music and even sorting the final track listing order, each and every aspect to putting this together as been a joy. Key to us achieving this has been the ongoing support of Holy Roar and Tone MGMT who have handled any nonsense we have thrown at them, and left us to our own devices to make the exact album we wanted to make. We are lucky as hell to have you people. We can’t wait for you to hear it. Play it loud!”
OHHMS – Debut full-length “The Fool”
Out March 31st on Holy Roar Records
– Pre-orders from February 3rd –

TRACK LISTING:
1. Shuffle, Cut and Reveal
2. The Magician
3. The Hanged Man
4. The World
5. The Lovers
6. The Hierophant
Armed with the thickest riffs and fieriest will, OHHMS formed in 2014 in Kent, UK. It didn’t take long for the five-piece to come up with two stellar EPs “Bloom” (October 2014) and “Cold” (June 2015), both released on London-based extreme music powerhouse Holy Roar Records. Clocking in at over thirthy minutes, each EP unfolds with two monolithic, angst-ridden tracks, blending the downtuned approach of doom metal with eerier and more progressive landscapes. On top of this distinctive approach in their songwriting, vocalist Paul Waller maintains maximum adrenaline levels by alternating between sumptuously deep gravelly singing, Viking-warrior bellows and roar-is-war call to arms.
As fearless explorers of the heavy music scope, OHHMS quickly build a strong reputation among the UK’s underground scene, which leads them to play big festivals such as Desertfest, ArcTanGent, Temples, Incubate, as well as playing alongside The Skull, Conan, Rolo Tomassi, The Admiral Sir Cloudesley Shovell and many more. Three years after their thunderous beginnings, the band is back in March 2017 with their debut full-length “The Fool” on Holy Roar Records. True to themselves, OHHMS continue their boundary-free ascension in quest of the sonic panacea, more determined than ever to brand minds with their cathartic, transcending creations.
OHHMS LINKS
Facebook⎜Twitter⎜Bandcamp
Holy Roar Records