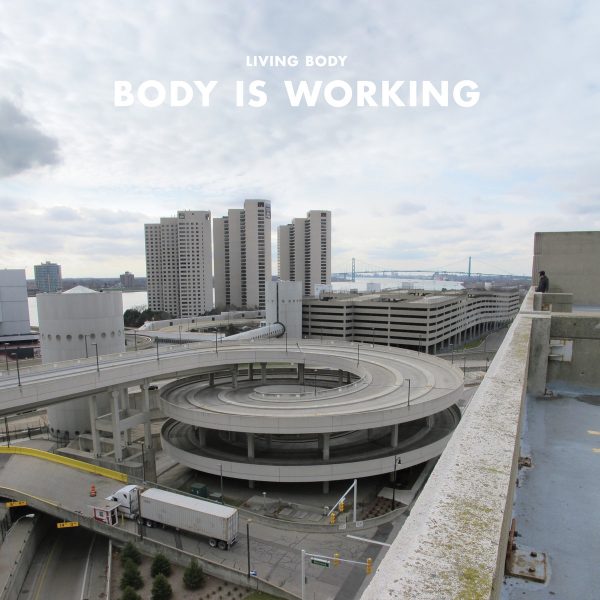 Leeds based Living Body have a fine knack at delivering uplifting but understated lo fi Rock and this is evident from the opening melodies of this album. The band who are the brainchild of multi instrumentalist Jeff T Smith (who you may also known through his work as Juffage) alongside collaborators Katie Harkin (the voice of Sky Larkin and who has also worked with the likes of Sleater Kinney and Wild Beasts) and Tom Evans of Vessels bring you their delightful debut album Body Is Working and it is just what you need to get rid of those January blues with its increasingly optimistic outlook on things.

The albums opening track Declaration Of Independence is indeed a declaration, a declaration of the bands sound and vision and the interaction between the musicians involved is immediately evident and the song has a quaint, lo fi charm with Smiths easy going vocals sitting comfortably atop a bed of laid back but stirring rhythms that coast along beautifully until the song reaches an instrumental section that is drenched in feedback and may seem abrasive at first but is actually beautiful in its own way and this seems an apt way to introduce the music of Living Body.
The lively Choose follows and begins the way the album started and fits the perfect pop template in terms of its length and its execution while the interlude Slowburner provides that seem feeling as the one that concluded the albums opening track and is one that slots in perfectly to the album and it’s cohesive sound.

Katie Harkin takes over vocals on the sublime I, Recollect and shows why her former band Sky Larkin were held in such high regard and hearing her vocals takes me back to seeing Sky Larkin play live at the Dot To Dot festival in Nottingham a decade ago and it’s safe to say that her singing is still as good as ever the track is a delight to listen to.
Some sombre strings start up the next song Trail Mix, pt. 2 and this instrumental is a masterclass in creating a feeling of melancholy after the jovial atmosphere of what has gone on previously and this mixture seems to define the music of Living Body brilliantly. The next track Heirloom starts with the same instrumental melancholy feeling which is a bit of a surprise as I thought that the next song would be catchy but the sense of sadness continues although their is beauty in that sadness and as the track progresses, it does build to an uplifting vibe before its conclusion.
The vocals of Harkin return for the dreamlike Last Few True, a song that retains the feeling of the opening tracks on the album while the reverb soaked Penumbra is another startling instrumental that the band excel at. Closer signals the end of Body Is Working and sees the band sign off on a high with that uplifting feeling back at the forefront on a song that commands your attention one last time and has a real anthemic feeling to it and feels like the perfect way for the album to end.

The albums production is part of its charm with that lo fi sound suiting the band perfectly and with the mastering done by Greg Calbi (who has worked with the storied likes of Talking Heads, Patti Smith and Tom Petty amongst others), it all adds up to a charming and well done collection of songs and shows that the future is more than bright for Living Body especially if the follow up is as good as Body Is Working.

Hear Arcade Fire’s New Song With Mavis Staples, ‘I Give You Power’