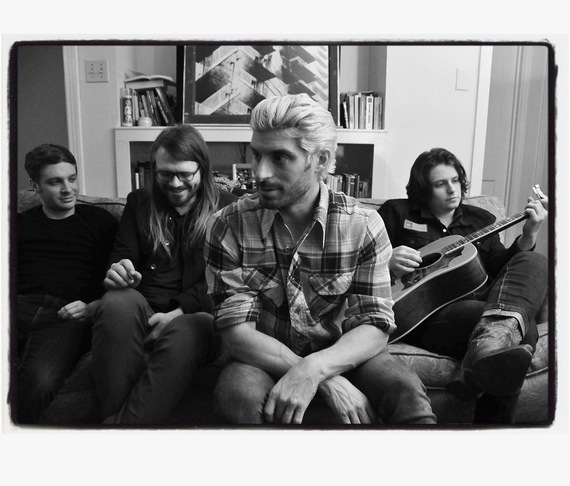 Leopold and His Fiction

Frontman Daniel Leopold says: “Saturday (Darling Destroyer),” our albums Alma Mater, hit us like a ton of bricks. Heavy and slow.  Scraped up by dredging the past with a clean net. Highly vacant in the servitude I owe to wiping my thoughts clear of abuse. I’m Finally human enough to keep an articulate mind and be willingly in public. The more I think about the past 5 years, I know I should have seen it coming. Darling Destroyer.”
Throughout Darling Destroyer, Leopold and His Fiction reveal their gritty ingenuity by merging delicately crafted lyrics with blistering guitar work. Co-produced by Daniel, Vance Powell and Chris “Frenchie” Smith (…And You Will Know Us By The Trail of Dead, Ringo Deathstarr, Jet), Darling Destroyer proves Daniel’s easy prowess as a frontman, his vocals endlessly shifting from brutal wail to tender serenade.
Daniel was born and raised in Detroit where he first began playing music. He then moved to California to study writing where he started crafting songs for the first time – combining years of practice on the guitar with his literary inclinations. Releasing their self-titled debut in 2006, Leopold and His Fiction built up a reputation as a powerful live act and landed gigs supporting ZZ Top, Gary Clark Jr., and Dr. Dog. Between their sophomore release Ain’t No Surprise and 2012’s 3, Daniel co-founded the folk outfit Cowboy and Indian, and spent several years touring. He has now returned to Leopold and His Fiction and is revisiting his approach to songwriting, straying from his novelistic tendencies. You can expect the upcoming album to be the band’s most dynamic yet.
www.leopoldandhisfiction.com
www.facebook.com/LEOPOLDANDHISFICTIONBANDPAGE
www.twitter.com/leopoldfiction
www.instagram.com/leopold_and_his_fiction