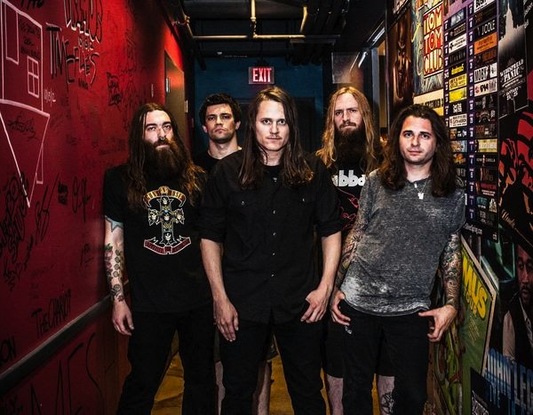 DARKEST HOUR SHARE “TIMELESS NUMBERS”;
BAND DISCUSSES NEW ALBUM, GODLESS PROPHETS & THE MIGRANT FLORA (MARCH 10, SOUTHERN LORD RECORDINGS), IN NEW WEBISODE
Darkest Hour, who recently announced the March 10 release of their ninth album, Godless Prophets & The Migrant Flora (via Southern Lord Recordings), share a second song from the 12-track album, streaming “Timeless Numbers”.
LISTEN TO “TIMELESS NUMBERS”
“This song, like ‘Knife in the Safe Room’, has a dual meaning,” explains Darkest Hour guitar player Mike Schleibaum. “The first is the continuation of the story line that permeates the album. In this track we see our main character struggle with the inherit history of the culture he/she was brought up in and the realization that it was always in our nature to divide and consume ourselves. In simpler terms, it is a reflection on the drain of modern life and the subsequent division / internal destruction that this life seems to always lead humanity towards. As we travel the world, we have seen how no matter where you are, humans divide themselves. We interact with immigration policies, borders and barriers that are cultural, economic, and political everyday that we are on tour. While traveling the world we have done our best to spread a message of anti-nationalism, unilateral respect for humans of all forms, and lastly the basic idea that music/art is more powerful and more eternal then religion, nation states, or even TECHNOLOGY!”
Pre-orders for the 12-song album are available now with physical bundles available via Southern Lord’s webstore (http://www.southernlordeurope.com/releases/view/godless-prophets-and-the-migrant-flora) and digital downloads, which include a download of “Knife in the Safe Room” and “Timeless Numbers,” available via Bandcamp (https://darkesthoursl.bandcamp.com/), iTunes (http://apple.co/2hpwKmE) and Apple Music (http://apple.co/2hSRIqX).
The band talks about the new album, crowd funding, working with producer Kurt Ballou (High on Fire, Nails, Converge) and the partnership with Southern Lord in the first of an ongoing series of podcasts and webisodes.  The premiere Godless Prophets & The Migrant Flora webisode can be seen here: https://youtu.be/UrLoXIsatug, with new webisodes available weekly through mid-February.  The band’s podcast, dubbed Darkest Hour Radio, is available here: http://dhradio.libsyn.com/ and http://apple.co/2htDn5v.